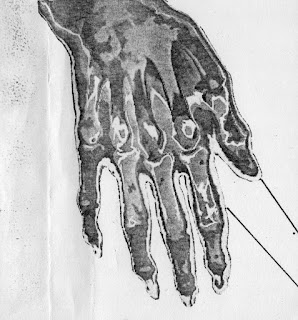 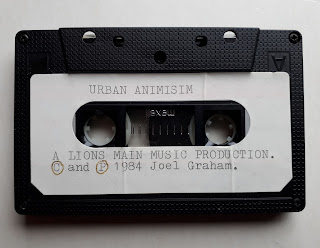 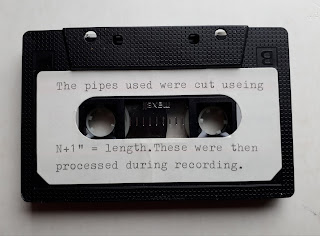 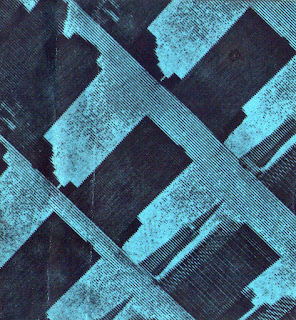 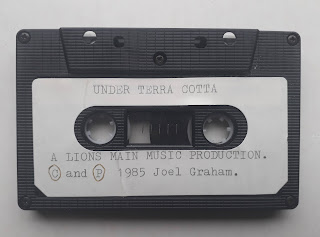 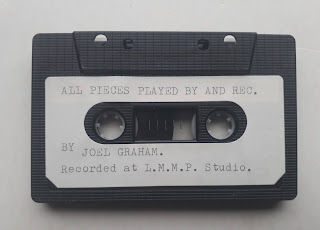 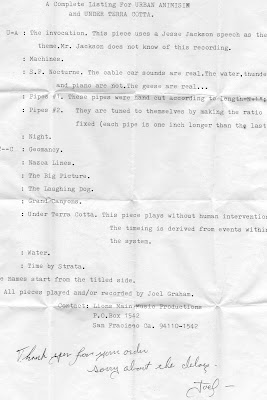 After the surfacing of two tracks by Joel Graham in the past years, many of us were curious about the existence of more music by this American artist. Finally we are graced with some of his mythical full-length cassettes.

Joel Graham is an electronic synthesist composer based in San Francisco who released a couple of cassettes during the 80's in limited quantities. His music consists of live synthesizer sounds, ambient electronics, hypnotic rhythm driven compositions and conceptual elements like field-recordings. Without too much information about Joel Graham and his musical development it's clear that he was very talented and that he created music that proved to be ahead of its time. In San Francisco he was part of a larger community of electronic musicians who were also involved in multimedia art projects and theatre. One of his frequent collaborators was percussionist and electro-acoustic musician John di Stefano who was also director of the experimental art space The Lab. Before we return to the bigger picture let's have a look at the two cassettes:

Urban Animism (1984) is the first album by Joel Graham. It starts with a long piece of increasingly intensifying electronics called Invocation containing a speech by Jesse Jackson, a political activist and confident of Martin Luther King. The composition reveals that Graham is not only interested in sound as an esthetic or sonic possibility, but he also incorporates emancipatory politics and the theme of social justice in his artistic expressions. In other tracks like Machines and Night we hear futuristic sounds that perhaps connect more to the realm of technology, but nevertheless feel warm and emotional. Even with a menlancholic undertone. A track like S.F. Nocturne incorporates field-recorded sounds of the city and seems to sketch a map of San Francisco by night bringing back the urban element into the ethereal electronic soundscape. Animism - the attribution of a living soul to plants, inanimate objects, and natural phenomena - placed in an urban context reveals the underlying sound of a city that is defined by urban development (city-planning, industry etc.) and its social structures (inhabitants, movement, classes). A concept that is also to be heard in certain tracks by Venezuelan electronic composer Angel Rada for example. An esoteric sonic interplay between what is visible and invisible in the urban environment.

Under Terra Cotta (1985), the second cassette presented here, opens with the mesmerizing Geomancy that is an undeniable little masterpiece of electronic composition that was lightyears ahead of its time. Geomancy, or "earth divination" is an ancient practice that looks at markings on the ground of tossed handfuls of soils, rock or sand and interprates its different meanings. Earth and its layers are a recurring subject on this album with tracks like Nazca Lines (of Peru), the Grand Canyon as well as Time By Strata (layer of earth). The city of San Francisco seems to also make its return in this album. A track like The Laughing Dog could be a reference to the mascot of small fast food restaurant chain Doggie Diner that was an iconic city symbol. The track Water relates to the earth theme, but also relates to the San Francisco fog that frequently covers the city after its departure from the Pacific Ocean.

If we look at the properties of Terracotta we learn that, just like skin, it has a semi permeable surface, and that it lets through water. Also that aspect could relate to the Water track. Under Terra Cotta seems to introduce the idea of a simple human instrument, a pot, a brick, that results in the creation of technology. Because ultimately, civilization is created through the very combination of art and technology, often not distinguishable from each other. The human being exists in the same nature from which it derives technology. An ancient notion explained over synthetic sounds of modern technological development.

Thus both albums by Joel Graham can be seen as complete conceptual compositions. They are audio essays on a constellation of interrelated subjects. Urban Animism describes San Francisco or a city at night, a ghost that haunts, that wanders around. Under Terra Cotta describes certain skin, layers of earth full of archeological treasures.

When we return to the general history of San Francisco of the last century we see (at least from a European point of view) a city that acclaimed fame for its psychedelic freedom, its fight against social injustice, its hippies and its LSD, its liberal LGBTQ community but also a city that became famous for different technological developments through big tech companies in the area. Companies that often precisely used that creative past within the post-fordist paradigm to create a ruling form of creative capitalist entrepreneurship gradually quantifying notions of freedom and creativity into forms of instrumentalism, control and algorithmic efficiency.

Today Joel Graham is creating open source sounds and someone who is sympathic to the common use of sounds and their usage through Pure Data. Just like some people felt the urgency to stay autonomous by choosing Linux in favor of Windows, it seems that also sounds and their usages were taken away through copyright systems and corporate grids. The instrument should remain/be in the hands of the people for it contains the elementary building blocks for the art and technology that can shape society, instead of following pre-created grids. As a synthesist composer Joel Graham stands in a larger tradition of American electronic music relating to pioneering composers like Morton Subotnick, but also to home-tapers like The Nightcrawlers.

Last but not least, the title of Joel Graham's label "Lions Main Music Production" could relate to the Lion's Mane mushroom that in homeopathic medicine helps a.o. against depression!

Many many thanks to Orpheu The Wizard for the kind donation of these cassettes (!) and to Kim-David Bots for his insights and tying together the loose ends.