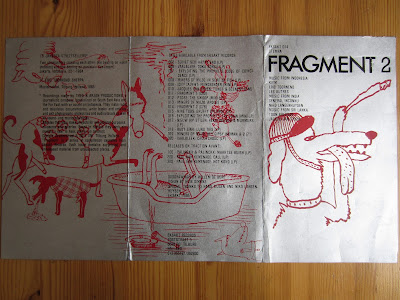 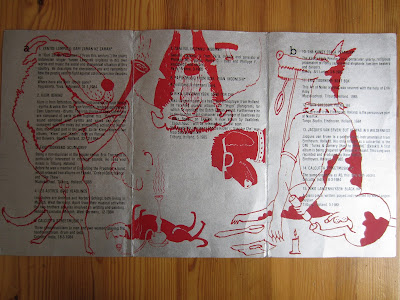 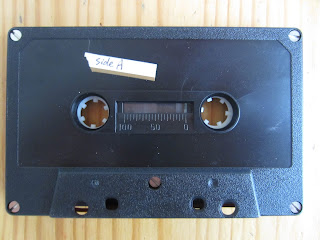 After Fragment 1 that I posted not so long ago here is the second Fragment compilation created by Tilburg based label Eksakt (more info about Eksakt in the previous post). Just like the first one it contains some previously released and unreleased tracks combined with ethnographic recordings. This release came with a screen-printed artwork with cartoon-dogs as well. A similar dog became the logo for Eksakt on their other releases.

The most notable Dutch group present on this sampler is Kiem. Kiem came from Rotterdam and combined jazz influences with analog synthesizer electro and strong rhythmic elements. Rotterdam has one of the biggest ports of Europe and Kiem used these characteristic elements and sounds in their music. They created three albums which are absolutely amazing and pretty easy to get still. Their self-titled first is probably their best. Other Dutch figures on here are Eric Toornend, a member of post-punk group Exploiting The Prophets from Tilburg (also present on Fragment 1) and Toon Bressor who was in one of Holland's best groups from the eighties called Nasmak.

Dutch Artist and musician Jacques van Erven contributes a piano track and Dutch jazz-bass player Niko Langenhuysen does some solo tracks too. Langenhuysen used to be in the Tilburg based jazz group Groep Ohm in the early seventies and his album Hypo from 1984 is a real gem. Lastly there are post-punk tracks by obscure German band Les Autres and French band General Inconnu and a couple of ethnographic recordings from Indonesia and Sri lanka.

This is actually a great compilation with lots of hard to find tracks and also another piece of Dutch underground from the eighties.