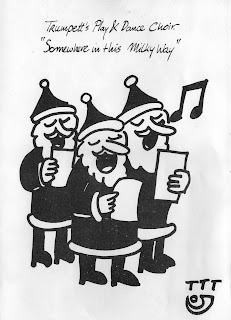 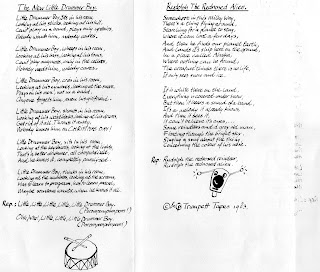 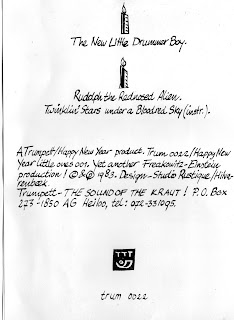 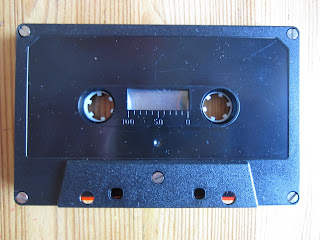 Merry Christmas and an Archaic New Year to all friends and followers of the blog!

This special New Year's cassette EP came out in 1983 on the legendary Dutch minimal synth label Trumpett. Trumpett is home to some of the best Dutch synth acts from the early eighties like Freakowitz and Einstein, Ende Shneafliet, Doxa Sinistra, The Actor and many more amazing pseudonym minimal synth acts by people on the label. Personally it's also one of my own favorite record labels.

Due to the many side-projects featured on the label, Trumpett sometimes published special releases on certain holidays. This cassette came out for Christmas and New Year in 1983 and was published as a  Christmas card. It contains three absolutely amazing minimal synth tracks in a Christmas fashion. The first side contains the Christmas song The New Little Drummer Boy, which talks about a drummer boy who is forgotten on Christmas day. The second side of the tape has an amazing take on Rudolph the Rednosed Reindeer called Rudolph the Rednosed Alien with a vocoder(!). The last song Twinklin' Stars under a Bloodred Sky is a great instrumental Christmas-synth (minimal X-mas) gem. This was posted before, but here is the original cassette. This stuff must be the greatest Christmas music ever. Really.


Because of this New Year's post I'd like to take this opportunity to celebrate the underground music blogosphere that roughly exists for a decade now. The Thing On The Doorstep for example is already here since 2006 (congratulations!). Although most of the great music blogs started out in 2007, a year before people had already been engaged in other platforms and it can be viewed as the starting point for most of the alternative music blogs. Some time ago I wrote an article in Knik (magazine of Amsterdam's best underground venue OCCII) about my blog and other strange music blogs and their importance (I might upload that one day). If you just think about how much music history has been rewritten these last ten years and how much forgotten music has been saved, given its deserved attention and has been rereleased it's pretty impressive. Just take this last year and take a look at some of the reissued artists scattered over labels:

That's a serious list of reissues coming out every year. It's getting hard to keep up! Also a great deal of this music used to be completely unknown some years ago. It means that we still have a group of people in these mad times pushing forward all of this innovative and totally ahead of its time music. Everyone involved in this shaping of music history and preserving cultural expression is greatly appreciated. Great work for the artists, new generations, history, anything. Aside from that I want to say that there is a lot of incredible new music as well at the moment!

Thanks to all involved in the music blogosphere for a decade! Happy New Year! And see you at the blog next month. I've got some great posts lined up as well as some unexpected donations!