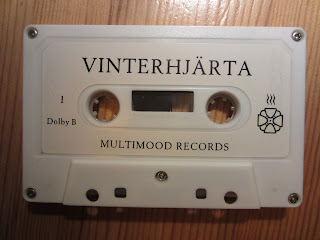 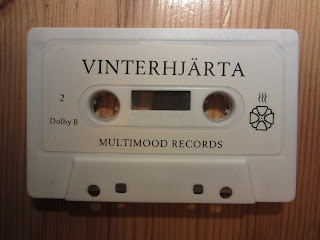 Vinterhjärta, meaning Winter Heart, was an obscure impressionist prog outfit from Sweden that consisted of Peter Bryngelsson, Dan Jonsson and Lars Liljegren. Although summer is still here, maybe we can engage in these winter soundscapes in a less frustrated way than when winter is actually in full effect later on (at least here in Europe). I guess the Swedes aren't bad in translating these particular environmental circumstances into musical moods. I'm sure the outfit was actually inspired by the season of winter.

Vinterhjärta plays moodish pieces in which progressive rock elements, ambient sounds and gentle piano play is intertwined. The A-side is a 38 minute long track in which synthesizers and guitar create a dreamy world reminiscent of the more mellow releases of the French Pôle label in the seventies or of cosmic Heldon guitarist Alain Renaud. It is maybe improvised in a bit too conventional cheesy manner, but it still takes you into a certain world, because it doesn't change drastically or builds up towards more energetic heights or anything. It's an impressionist prog piece that's gets specially interesting when the synthesizers are more apparent.

The B-side has eight different shorter pieces, usually created with piano and synths shaping different moods and atmospheres. The pieces are gentle, spooky and dreamy at same time. It reminds me a bit the Dutch soundtrack made by Louis Andriessen named Golven (connected to the Dutch Noordzee) or Scandinavian ECM releases if they contained a bit more of the darkness from the eighties with electric guitar disturbance. All in all it's a beautiful and peaceful album from Sweden's eighties and fits in the current interest in more ambient musical works from the eighties.

The blog had a bit of a hiatus lately because I was out of town and I was pretty busy. Sometimes there will be periods in which it's harder to keep up the consistency. Nevertheless some of the best posts are still to come. I've got quite some insane material for the near future!
Posted by Bence at 14:10