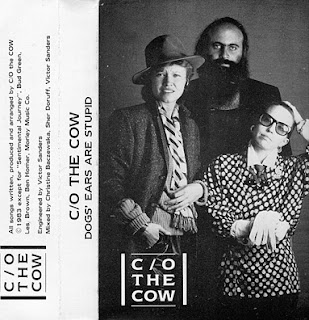 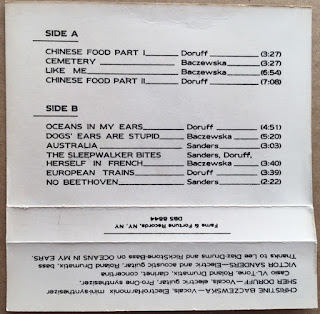 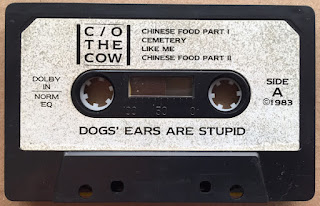 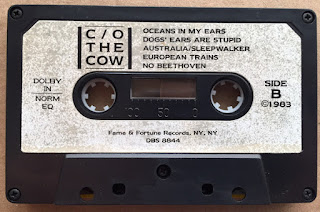 This is the first time that I post a tape that I didn't digitize myself and that wasn't donated to the blog. Lately I've been doing a lot of late-night searches into inactive blogs and other platforms to map obscure material that was posted on the web these last ten years but that got lost again (remember when your external hard drive crashed?). Some of this hard to find material I'm uploading to Youtube (for the time being, I'm not a fan).

This cassette that I found on Care Of The Cow's own webpage has little to do with what I wrote above, just thought that it needs more attention!

Care Of The Cow was formed in Chicago in 1974 by Christine Baczewska, Victor Sanders, Sher Doruff and Kevin Clark. From 1974-1984 Baczewska, Sanders and Doruff produced an album “I Still Don’t Know your Style” (1981) and an album length cassette Dog’s Ears Are Stupid (1983). There are many live recordings and an promo LP from 1975.

The album I Still Don't Know Your Style captured COTC's amazing eclectic musical style. With their psychedelic folk, art-rock, strange manipulations and collages with humouristic lyrics COTC remains one of those well kept secrets from Chicago's 70's and 80's underground. Some people remember them from festivals in the mid-sevnties and some remember them from a later period in the eighties. Nevertheless their music lacks attention from listeners, since it's musically too unclassifiable for many.

COTC's even more hidden cassette Dogs' Ears Are Stupid collects some other sounds than you would expect. Apparently the band began to experiment with synthesizers and drum machines in the eighties and started to poor their experimental folk-rock music into minimal synth depths. They managed to achieve their musical warmth in a cold way. A great way only real groovy people that were active in seventies could crossover with into the eighties (Daevid Allen could be another example)  What a gem! I think the track European Trains has some of the best minimal synth potential of the album, while the folk elements are still there.

Care Of The Cow ceased to exist by the mid-eighties and the members allegedly got scattered over the US and Europe. The singer Christine Baczewska released a compilation CD in 1993. Maybe someone knows more.