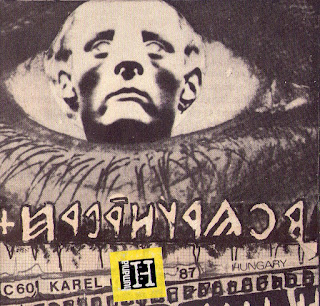 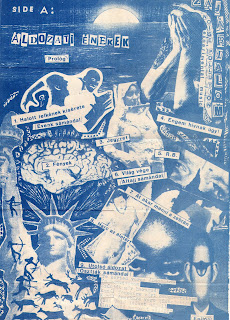 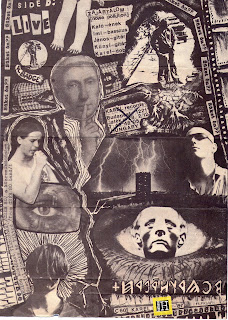 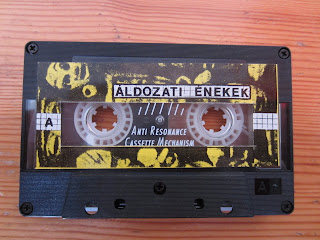 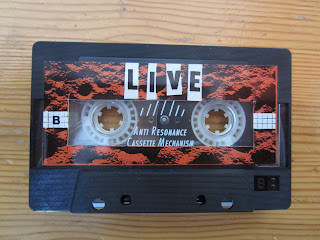 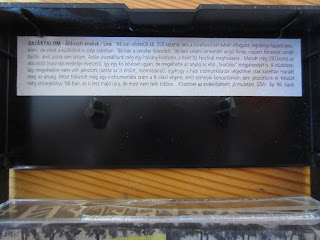 From the inner liner notes:

In 1986 about 250 cassettes were made that were distributed in the next two years. Most of them were shared in Hungary, but the foreigners also took the tapes with them in royal amounts. In 1988 the band disbanded. Somewhere in the 90's an unknown English film crew made film music out of the recording that I haven't seen or heard since. Then we reformed for a faint experiment being invited by the '92 East Festival... About 250 of the original cassette sleeves remained (the original print got lost), so with a little delay the first "official" publication survived and got published. We didn't have money to purchase the studio recording tape (it also vanished since then (without a trace), so after finishing this at home (as homework) the material only remained available on cassette. Now on the last bit of the B-Side an instrumental recording has surfaced that we didn't play at any of our concerts. A book with lyrics was made in '88, which will be republished, but as of now it doesn't go any further, thank you for the interest, jó mulatást, SZIA! (Have fun, BYE!), Budapest '96 Karel

Zajártalom means "Noise Pollution" in Hungarian and this little cassette here is an ultra rare music relic from the Budapest underground. And also of industrial music culture behind the communist iron curtain in general. I have uploaded some Hungarian industrial tapes before of bands like Art Deco, BP. Service or musician Kósa Vince. Zajártalom kind of fits a similar realm, mainly in its use of cut-up and collage, but they also move into greyer alternative noise-rock areas similar to the shamanic noise-rock punk of Vágtázo Hallotkémek or the obscure Hungarian industrial project Falatra(x).

The music is pure experimentalism with improvisation where noise and collage find each other with an added protagonistic role for dark existential poetry through lyrics. I wish I would be able to tell more about what the the lyrics say. Also the text that is recited at a certain point by a child is some of the darkest existential stuff I have heard. These are all musical examples of real subversive and deep artistic statements in need of freedom in a totalitarian country in which grey society bleakness and state censorship were shaping daily life. To get an idea of this feeling and to understand the Hungarian music underground within this bleak communist realm I recommend you to watch the 2012 documentary East Punk Memores which is uploaded online. It gives a nice view on the mentality and life back then.

This Zajártalom cassette is such a special document of that time and it's not often I stumble upon these things even when I know quite some of the underground figures of that time in Hungary. Ofcourse there was some Industrial music in the former socialist countries, but in extremely marginal forms. Czech Republic had a movement, Poland, Hungary etc. and ofcourse Yugoslavia that really birthed some iconic bands like Laibach or Borghesia. The political circumstances differed per country and in Yugoslavia there was less cultural censorship for example. Some punk and wave music from the west came out quite regularly on vinyl. Also their cinema was not overdubbed so people could much better understand and learn English and deal with all the marginal information. In Hungary it was much rather fragmented. A handful of people knew about industrial music somehow. Some tried to musically mimic that style, but some were just making noise or some detuned rock music and ended up doing industrial in hindsight.

A few examples of how Industrial music entered Hungary from what I know is the visit of some Hungarian punks to East-Berlin in the 80's. The East-Berlin punks knew about Einstürzende Neubauten, but also had more knowledge already about new wave bands like The Cure and such. Furthermore I know that Antwerp based industrial pioneers Club Moral visited the artist village Szentendre near Budapest at the beginning of the 80's where they also played live. This village birthed the legendary Hungarian art rock group A.E Bizottság for example, that was formed by a group of artists and painters.

Then later on in the first Budapest underground pubs like Fekete Lyuk (Black Hole) there were some alternative concerts. Once there was a concert of Belgian industrial band à;GRUMH, but this was already later than this release, maybe around 1989. The German Neue Deutsche Welle group Der Plan did a legendary compilation with different European bands called Fix Planet! in 1981. The album contained the first release of Esplendor Geometrico's cult song 'Moscu Está Helado' (Spain) for example, but also a track by Vágtázo Hallotkémek. Der Plan visited Budapest back then and met the band according to the sleeve notes. Anyway one never really knows how the information flow worked precisely, but these are just some examples of Industrial and underground music encounters in Hungary during the socialist times.

Check out the energy of this cassette, it's pretty interesting. It's all an answer to political repression as well as self-established anti-culture as an antidote to this repression. There is a so called 'album' entitled Áldozati Énekek (Songs of Sacrifice) on the A-Side that I couldn't dissect into different tracks and a Live recording on the B-Side that doesn't sound much more live than the A-Side. A rare relic of subversive experimental music from behind the iron curtain. Marginally released on cassette in 1987, officially marginally re-released in 1996.