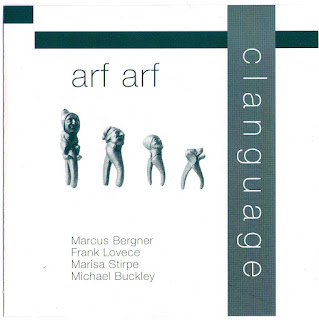 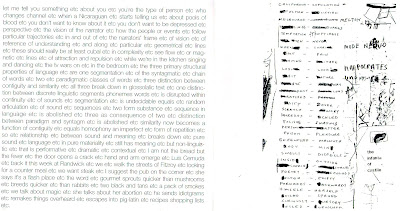 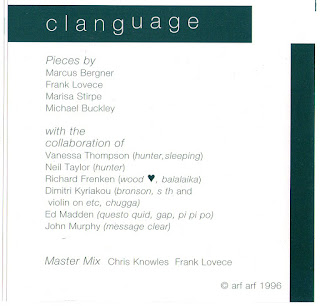 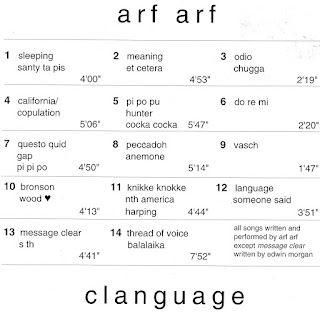 Arf Arf was an important Australia based sound-poetry group that consisted of Marisa Stirpe, Frank Lovece, Michael Buckley and Marcus Bergner. Since the mid-80's they did over a hundred international shows. The members have been active in the Australian experimental music underground since the late 70's. Frank Lovece was an Italian born musician that moved to Australia as a child and played in the cult-group The Primitive Calculators. Michael Buckley and Marcus Bergner played in an obscure band called Too Fat To Fit Through The Door. Marisa Stirpe in groups like Thrush and The Cunts, The Take and The Egg. Most of these bands that were related to the Primitive Calculators were compiled on a CD in 2006. Marcus Bergner also made the cover art for The Boys Next Door's Hee-Haw EP (Nick Cave's first band before The Birthday Party and later The Bad Seeds).

Arf Arf's Clanguage brings together a variety of lo-fi sound-poetry tracks that are quite musical in their nature. We can hear gripping sound poems layering different narratives on top of each other. The artists are reciting poems as well as displaying the suggestiveness of poetic meaning within a sound-flow of cadence, the occasional use of musical instruments and different voice exclamations. It often leans to absurdism because of the peculiar communication between the voices and the non-languages they are using. It's really amazing stuff, absorbing the listener into the intimate world of the poets who were immersed in their practice. This immersion is also reflected in the way in which the notations of the poems were done, being actual little visual pieces of art in themselves. Take a look at them here.

Arf Arf is a nice example of Australian (sound-) poetry that played an important role in its underground music history, whether coming from a beat icon like Daevid Allen or the sound poems by Amanda Stewart.