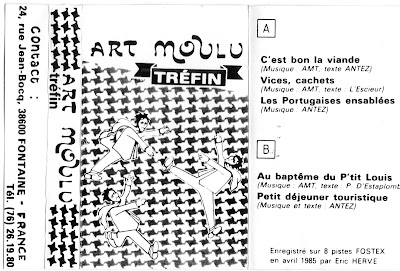 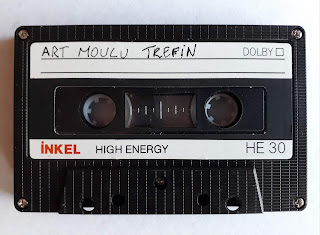 Art Moulu Tréfin were a Rock In Opposition band from France that consisted of Jean-François Welter, Jo Thirion, Maurice Ott, Olivier Masson and Richard Antez. Their sound obviously has something akin to Magma, which is basically the start for most French bands with complex intrumental structures in their composition, but they also remind me of the French band Komintern from the 70's. Ofcourse Art Moulu Tréfin is a product of the 80's and had an own signature to their music with strange lyrics, humor and zig-zagging compositional manoeuvres. The band was also compiled on one of the Recommended Records quarterly series.

The music on this self-released cassette EP from 1985 was recorded on a Fostex 8-track recorder thus sometimes a bit lo-fi in quality. Nevertheless, it consists of some top-notch humoristic RIO complexity that fits a similar musical realm as the French Rock In Opposition band of the first hour Etron Fou Leloublan, the Swiss group Debile Menthol or the Estonian outfit Ne Zhdali.

Finally we can hear Art Moulu's music from the early times after Mutant Sounds published their equally great live album from 1990 over a decade ago. Another essential piece of French RIO history.

This cassette is not on Discogs.