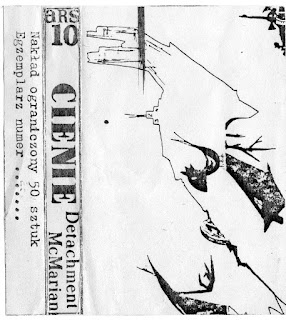 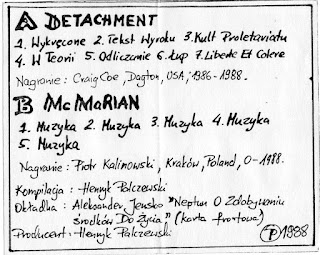 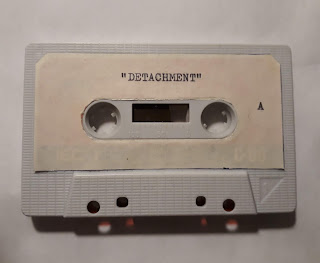 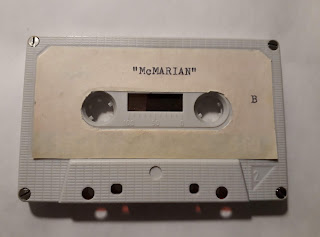 Here's another obscurity from the Polish home-taping circuit from behind the Iron Curtain. This time it's a split-cassette between the American act Detachment created by Craig Coe from Dayton, Ohio recorded between '86 and '88 and McMarian one of Poland's great industrial home-taping acts created by Marcin Bednarski and Piotr Kalinowski from the city Kraków.

It's an interesting fact that this isn't just a Polish cassette and that the members of McMarian were somehow able to share and receive music material over the borders of the socialist state, even if the political system was in its very last stage before the collapse. The Polish home-taping scene had been created by necessity since these type of bands were unable to release their music officially, nevertheless one can see that they did have ties with the international cassette culture. Cienie, meaning shadows, is a vivid example of this mechanism, that through its "secret" distribution had much more meaning than just having a taste for particular music. It's part of an unclassifiable almost non-existing area where art opened up a place for individuals who could gain some autonomy through their marginalized practices to counter the political and cultural programming of the totalitarian regime.

I can't find much info on the Detachment project from the US, but it somehow reminds me of the minimal synth sounds of Patrick Gibson from Australia. A very nice combination of experimental sounds and rhythmic industrial minimal synth. The tracks by McMarian have an even stronger foundation in rhythmic industrial music creating loops of manipulated rhythms in combination with samples. Specially the last tracks on the tape remind me of the primitive era of Esplendor Geométrico from Spain or the early Australian industrial act Mesh.

Actually the music is quite nice, unfortunately it's buried under a thick layer of white noise. I tried to digitize this several times to get a better sound (dolby, no dolby, equalizing etc.), until I found out it will just turn out to be like this. With renaming files and cutting I've spent four hours on this tape. The opening track by Detachment also starts low in volume and then starts to peak later on. Anyway, that's one of the things with those obscure tapes from Eastern Europe from the 80's, the quality is not that high. But because of its background and totally different cultural and technical circumstances the music should be appreciated in its lo-fi nature as a testament of the underground. It actually sounds better directly from cassette, as if the music has become one with its medium.