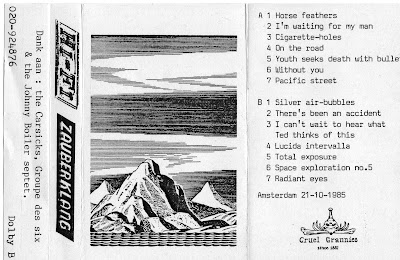 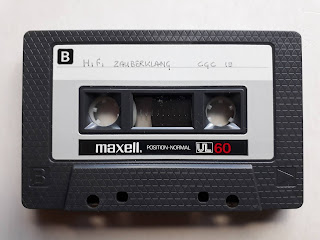 Here is another mysterious project from the Dutch home-taping culture. Hi-Fi was from Amsterdam and apparently related to a small circle of other obscure musicians from the city. Despite its hi-fidelity name, the Zauberklang (magic sound) of the band consists mostly of lo-fi damaged rock and roll and electrified experiments. A Velvet Underground starting point is deconstructed into dark and almost mechanical soundscapes fusing the lines between post-punk and psychedelia. As if The Index, 39 Clocks and the early incarnation of Skullflower would play together in some small basement. Distorted home-taping music with a strong druggy beatnik culture influence for people wearing their sunglasses in the dark. Hold your horse...

Within the Dutch home-taping culture of the 80's there's not a whole lot that sounds like this. A band I can think of is Roy G. Biv that was also Amsterdam based and looked for similar synergies of psychedelic rock with analog drums, synthesizer sounds and trancelike repetitions in their music. Then there was the band Vovokai from the city of Eindhoven that had a similar approach. Last but not least the mysterious Alien project qualifies for the sound as well. It remains surprising that these type of bands existed in the Dutch underground, probably even seperate from each others' influences.