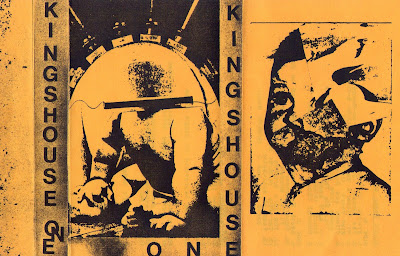 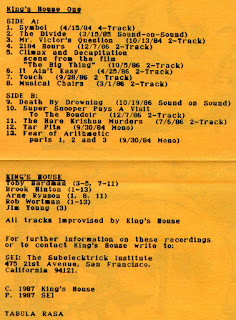 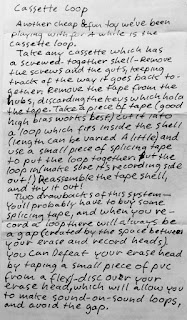 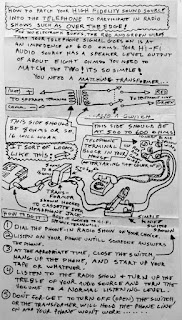 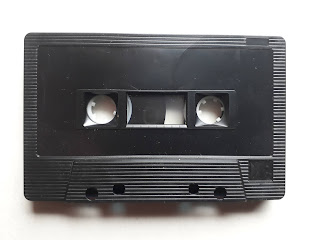 King's House was a project by members of the home-taping and improvised free-music collective Big City Orchestra from the greater San Francisco bay area. The project consisted of Toby Hardman, Brook Hinton, Arne Ryason, Rob Wortman and Jim Young. The BCO started out already in the late 70's and kept being active throughout all decades to come. The output of their music, first on self-released cassettes, later CD's and vinyl and later MP3 albums on net labels, is so vast (literally hundreds of releases) that it would be hard to make your way though the entire discography. Let alone adding all the members' solo projects and different side projects like King's House. Moreover the music is never the same and morphs into all possible styles and everything in-between.

The cassette we have here is the first King's House release and displays a wonderful collage of absurdist improvisational music. We hear radio cut-ups, tape loops, minimal synth manoeuvres, damaged pop songs, noise, musique concrète madness and interesting inventive soundscapes. It's a carefully composed release with lots of attention for its variety and the succession of the tracks.

A very nice tape that has that distinctly American cassette culture sound. I think even though this is the King's House project, the music might be a great starting point in getting to know more sounds of Big City Orchestra as well. A burst of endless musical creativity.