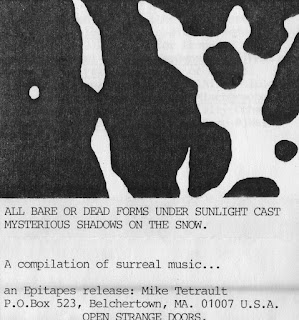 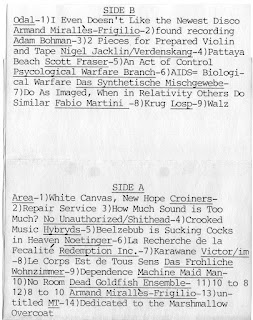 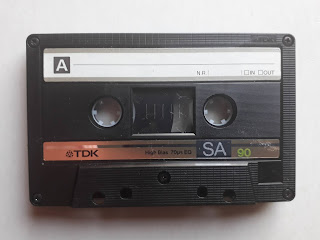 Here's another nicely assembled international compilation cassette on American Epitapes that was established by Mike Tetrault from Belchertown, Massachusetts. Throughout the 80's dozens of these compilations were created. Each compilation was given a poetic title, sometimes even in the form of an entire sentence. Some tracks were taken from existing releases while others were sent specially for these tapes. You can read an interesting interview about these cassette series with Mike Tetrault over here.

All Bare Or Dead Forms Under Sunlight Cast Mysterious Shadows On The Snow is a compilation that covers the theme of “surrealism”. Artists were free to interpret that as they pleased which resulted in a diverse range of sounds. The tape starts with a nice song by the new wave and dreampop group Area that consisted of Henry Frayne, Lynn Canfield and Steve Jones. Continuing the A-side there are a.o. tape-loops by Croiners aka James Levine, electronic home-taping sounds by No Unauthorized and minimal music by The Dead Goldfish Ensemble.

The B-Side starts with Dutch home-taper Odal and furthermore displays a broad variety of music with the avant-garde violin sounds of Adam Bohman, strange soundscapes by Nigel Jacklin (the guy who convinced his music teacher to book Throbbing Gristle in his school Auditorium in 1980 and created the Alien Brains project as well as Verdenskang), surreal sounds by Berlin manipulators Das Synthetische Mischgewebe, improvisation by Italian clarinetist Fabio Martini (part of The Zint Group and collaborator of the great RIO and impro band La 1919), some organ music by Los Paranos and many tracks in-between.

All in all quite a nice compilation with some known and lesser known protagonists of the international cassette culture network of the 80's and a classic of the Epitapes series.