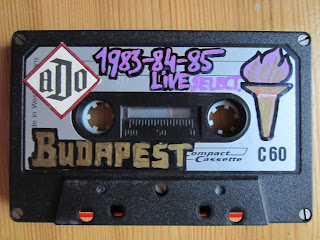 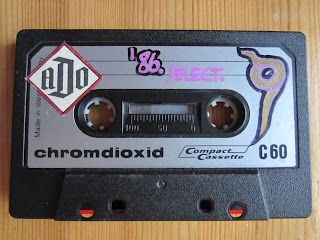 Art Deco was a Hungarian industrial group that started in the early eighties. They are mostly famous because they did quite some concerts together with bands like Test Dept. and Die Tödliche Doris. I think they have also played at the famous Berlin Atonal Festival. Usually when somebody mentions this band it is typified as the “Hungarian Einstürzende Neubauten” which on the one hand side isn’t really strange. Bands behind the iron curtain had little knowledge of musical developments so when encountering a seven-times-overdubbed C-60 tape of a band like Einstürzende Neubauten sure they were influenced by it and were recreating something alike.

However, in itself bands like Art Deco were very obscure in Hungary and even today when it’s more than 20 years ago that the iron curtain fell, bands like these are still somewhat in the shadows of slightly more popularized sounds that we know from the nineties. Industrial, weird New Wave, Punk etc. were not really fully flourishing in the Eastern Block (except Yugoslavia), unless you knew about this fringe stuff and you didn’t consider the commercialized fashion side. Actually you could just go to jail for doing things that could be perceived subversive. So it’s safe to say that these bands are quite unique. Moreover they did have own artistic content and created music as good as everywhere else.

This cassette has live songs on the A side and studio songs on the B side. Furthermore this is a self made compilation as you can see. The live-side has music from ’83, ’84 and ’85 and is reminiscent of the great (!) Hungarian shamanistic rock group Vágtázó Hallotkémek (VHK). Specially with the depressive Hungarian vocals that are about other realities and dark voids, it creates a similar atmosphere. The non-live side is from ’86 and consists of a twenty minutes church choir and bells straight forward classic industrial track reminding me of Current 93’s Nature Unveiled period. The other tracks resemble strongly rhythm based industrial acts like Esplendor Geometrico, early Test Dept or even more so the dutch band Het Zweet.

This is an old and rare cassette, so this also shows the ups and downs in sound and production. It tried my best, but on some songs the stereo starts to be mono and so on. Also I don't know the song titles, so I called them untitled. Art Deco is a great obscure band that needs more attention, especially their old material. You can find some other music from Art Deco here and someone is doing a compilation on Hungarian industrial and wave music here where you also find nice posters of this band.

More things are slowly being uploaded to the blog! I’ve been extremely busy, but stay tuned! More Eastern European cassettes, more other stuff!
Posted by Bence at 12:00