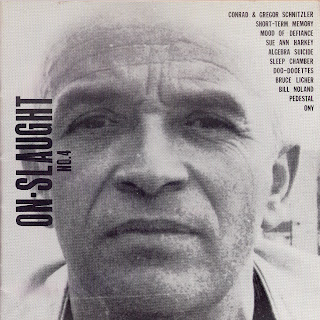 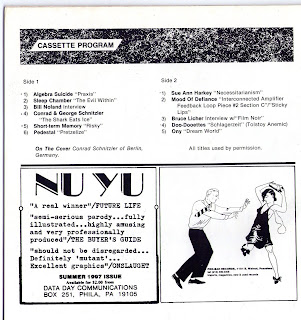 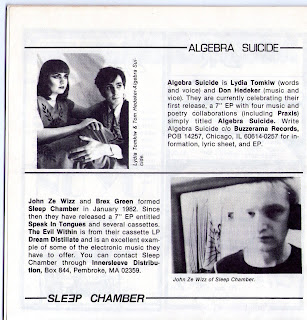 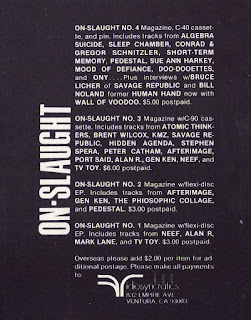 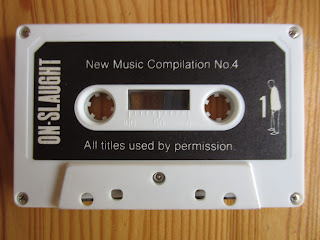 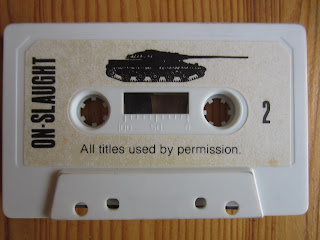 This here is - I think - the last cassette of the On-Slaught compilations which is still not to be found on the web. Moreover it takes us back to the beginning of this blog with cassette releases from the early eighties DIY home taping scene (more similar stuff to follow soon). The On-Slaught volumes always consisted of some songs taken from proper album releases and previously unreleased tracks by the featured artists. All the other five On-Slaught compilations are to be found here and here. This time I will make an exception by quoting what Cranio of The Thing on The Doorstep tells us about the On-Slaught series because I couldn't do it more accurate:

On-Slaught magazine was founded by Jody Quirk (editor) in 1982 and published by Artwerk Records with the intent of bringing attention to unusual and experimental music. The first two issues had flexi-discs in them and were successful on a cult level and brought the magazine notoriety in the darker side of the budding New Wave music scene of the early 80s. However in 1983 Jody Quirk left the magazine in career pursuits and electronic musician Mark Lane assumed the role of editor. He was assisted by the graphic artist Julie Vlasak (now with Rhino Records). The two of them published four more issues of On-Slaught on the Idiosyncratics label as a cassette magazine. This not only allowed them to have more bands/artists participate, but also pushed them into the forefront of a by now flourishing worldwide cassette underground. The reader would listen to the cassette program while following the information provided in the printed portion. At the time this concept was ground breaking, and has now become influential as attested to by all magazines that now have CDs in them.

This fourth compilation shows electronic Krautrock legend and founder of Kluster Conrad Schnitzler on the cover of the magazine who plays a track with his son on this compilation (they did a whole album together in the early eighties). Other acts present are a.o. Algebra Suicide, Sleep Chamber, Doo-Dooettes, Mood of Defiance and Ony. What I personally like about the On-Slaught series, apart from the extensive information on international bands, is the right balance between electronic acts and more punk-like improvised noise-bands. Great songs! Legendary compilations. I included the full magazine in the file.