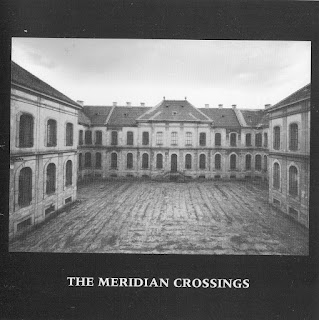 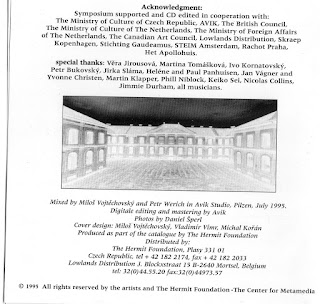 This is a CD only compilation around the music and arts symposium The Meridian Crossings that took place in Plzeň, Czech Republic in 1995. It is a varied release containing Czech folk musician Pavel Fajt, a.o. known of the amazing Czech group Dunaj, Cellist Vojtěch Havel who also did many ethereal folk and avant-garde world music soundscapes with his wife Irena Havlová and also many more improvisation musicians from the country I know less about.

Then present on here is English Rock In Opposition hero Tim Hodgkinson, known ofcourse as member of the pioneering RIO band Henry Cow. Also Dutch and Scandinavian artists are compiled (like Ad van Buuren) with art-installation sounds and improvisation pieces. Drummer Jim Meneses is also featured on the compilation, who played in the Berlin based band Stan Red Fox which I posted before on the blog. Lastly present here is Australian sound-art poetess Amanda Stewart.

The Meridian Crossings is a nice historical sound document of a manifestation of experimental music. A moment in which people from different countries exchanged musical talent in a post-socialist country that always had a very strong experimental underground scene in which music played a pivotal role. Within Eastern Europe, Czech Republic was always musically ahead with legendary groups like The Plastic People of The Universe, DG307 or Extempore. Their sounds concealed critical politics, poetry, art and philosophy in a context of the darker realms of folk and progressive rock experimentation to fight repression and to share state-forbidden information in order to uplift generations of people who were fighting to change the system. On The Meridian Crossings we can hear a new time that is still rooted in this past, but already merging with a global contemporary art-world representing a new transnational unity through the serious but also light-hearted musical avant-garde.