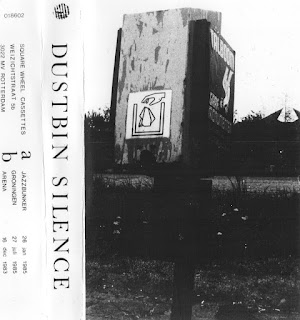 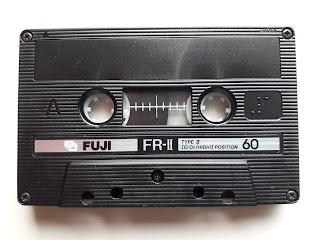 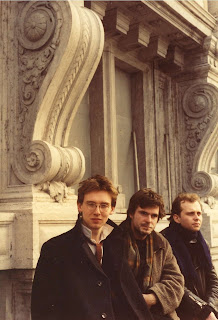 Dustbin Silence, however, was connected to the Rotterdam based Jazzbunker scene that existed around the legendary Jazzbunker venue which functioned as a home for Dutch and international improvisation, jazz and rock in opposition. During the 80's Rotterdam had numerous special bands that created diverse styles out of a blend of new wave, jazz, home-taping and improvisation. Some of them were also performing at the Jazzbunker. Bands from Rotterdam from those times are a.o. Dull Schicksal, Nine Tobs, The Black Sheep, Kiem, Kontakt Mikrofoon Orkest, Niew Hip Stilen, Debiele Eenheid and many others.

On this cassette by Dustbin Silence we hear a recording from the Jazzbunker, but there are also pieces recorded elsewhere in The Netherlands. It gives a nice impression of the group's live recordings:  gloomy atmospheres combining free improvised sounds with punk poetry in Dutch and English. It reminds me of industrial performance art groups sounds of the 80's of which the live recordings resemble much more of a document of a scene than perfectly composed tracks. The Berlin band Sprung Aus Den Wolken sometimes created such a feel for example.

In any case here's another interesting cassette hailing from the Rotterdam improvisation scene of the 80's.