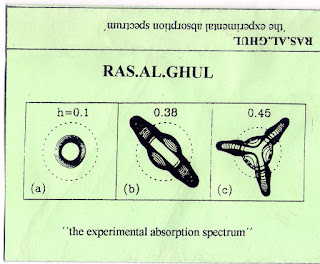 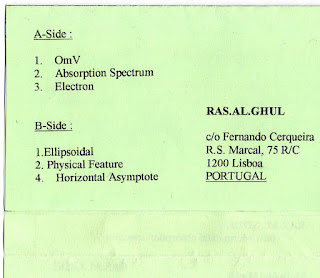 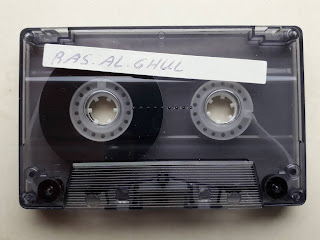 Ras.Al.Ghul was an electronic music project from Lisbon created by Fernando Cerqueira and Paulo Rodrigues. The duo started out during the mid-80's as an electro-industrial group called Croniamantal. They released some tapes by themselves as well as on the Portuguese cassette label Ritual De Sombras and contributed to a number of Industrial compilations. After a short existence they decided to bury their industrial project to start the hypnotic electronic dance project Ras.Al.Ghul (perhaps named after a supervillain from the American DC Comics).

The Experimental Absorption Spectrum is a tape release that was apparently distributed through experimental cassette labels like Tonspur Tapes and Maljugin Musik in Germany. The album displays an electronic tribal sound that touches on different genres of electronic music of the 90's - from Drum 'n Bass to Downtempo - yet the music never really conforms to any of these genres. The sound is maybe closest to a 90's psychedelic trance atmosphere, but the lo-fi quality of the recording in combination with the electronic experimentation doesn't allow it to become generic.

It sonically connects the industrial culture's breeding ground of the 80's with the rave feel of the 90's through hypnotic beats and sub-aquatic ambient electronics fusing technology with the mind's eye: a Portuguese underground sound that balances on the sonic intersection between a neo tribal industrial music tradition à la late Muslimgauze and the sound of upcoming communal neo-psychedelic trance festivals.

Southern European space music to be absorbed by.