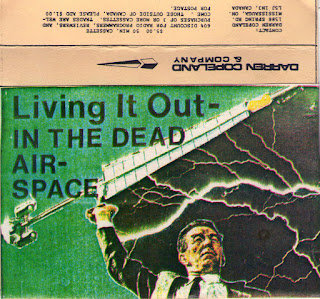 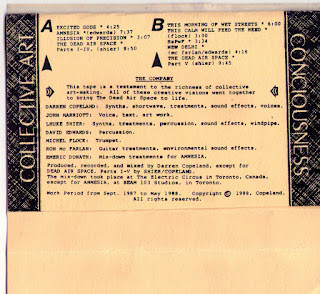 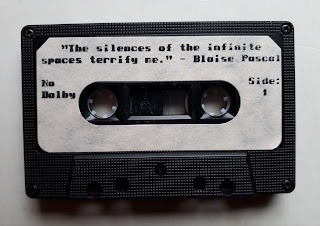 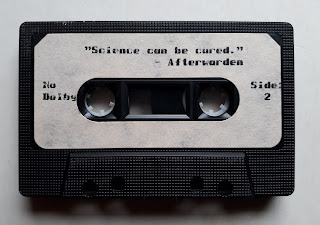 Living It Out In The Dead Air-Space was the magnum opus cassette album release by the Ontario based composer, sound-artist and electronic music producer Darren Copeland. The music was realized over the course of half a year during 1987 and 1988 together with a larger group of Canadian experimental musicians: Ron McFarlan (also to be found on the blog under his project Dust That Collects), David Edwards, John Marriott, Michel Flock and Lhuke Shier.

The pieces create a conceptually hollistic space that consists of dark ambient electronic soundscapes, spoken word, field-recordings and ethno-tribal influences. It carries different properties that on the one hand seem to carefully invoke the void of space (a dead end space) with its dark and silent chaos of endless probabilities and on the other hand it displays human consciousness and rational forms of understanding that are defying the dead end space from an existential point of view. The sounds of the dark untamable and alienating universe have an eternal presence in the natural and urban environment on earth. Alienation and the presence of the unknown are of great influence on life existence.

Living It Out In The Dead Air-Space is another beautiful work of Canadian experimental music that is perfect for a deeper listening experience. Simultaneously it works well as an invocation for different existentialist questions on a scientific, natural or spiritual level.

Through the further development of technology in later decades sound explorations from scientific standpoints have obviously become endless and have elaborated into many realms. Yet on this recording we can experience the scientific exploration as a subject of the music rather than that scientific approaches are being used to create the music.

Considering the year of the release, ofcourse Mr. 'Star Wars-program' and buffoon-president Ronnie Raygun is depicted on the cassette cover, but I suppose we could all think of other people suitable for the cover in today's world.