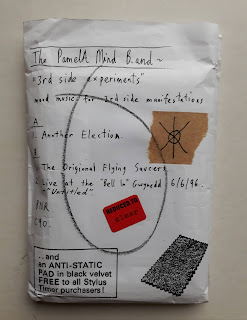 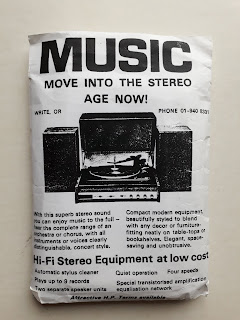 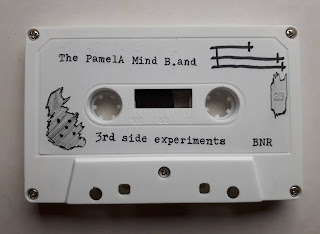 Next up on the blog is this quite mysterious project from the 90's called The PamelA Mind B.and which was created by Mark Reeve. I'm guessing that he hailed from Wales because one of the tracks was recorded live at the "Bell In" in Gwynedd. The music is quite noisy and consists of long improvised electronic soundscapes and radio cut-ups combined with other distorted sounds generated through various pedals and machines. The music is being introduced at the start of the tape as a sonic search for a so called "third shadow side" of the cassette through the exploration of its sounds, hence the title 3rd Side Experiments.

Even though a lot has been done in this particular field of music it does have a dreamlike and surrealist touch to it. It reminds me somewhat of the Canadian act Dust That Collects that was posted on the blog some time ago. The PamelA Mind B.and was featured on a tape compilation during the 90's but I'm not sure whether more material was released.

In any case another fine DIY cassette with some nice plunderphonics-bruitist-table-full-of-equipment-noise-music from the last decade of the last century.