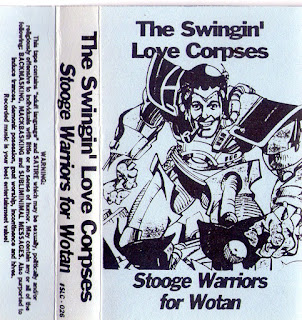 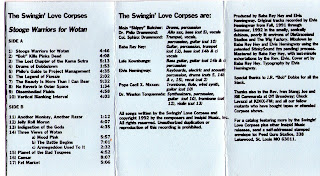 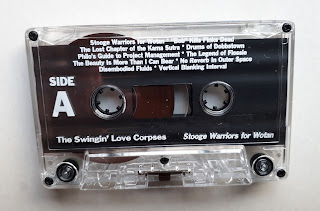 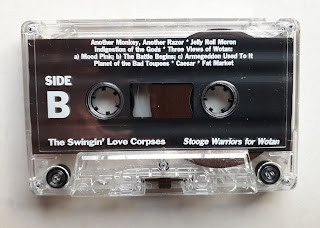 Philo Drummond, one of the key figures of the band, was founder of the Church of the SubGenius together with Reverend Ivan Stang. The church represents a parody religion that mocks popular as well as lesser known belief systems. It also has an own mythology created around the ficticious 1950's salesman J.R. "Bob" Dobbs, who saw God on a televison set he created. He is used as the symbol and epitome of the recurring American capitalist dream and is also depicted here on this cassette cover as some sort of sci-fi warrior.

In 1988 Ivan Stang and others published the book High Weirdness By Mail that was a compendium of all kinds of strange fringe-organisations, visonaries, UFO worshippers, political extremists, Jesus-freaks, weirdo's, conspirators and other pseudo-religious groups. Included were their mail-adresses or other contact information and descriptions. People were thus able to communicate with these groups and started to correspond.

Through the mythology and tactics as well as the complex systems which imitated their subjects, the Church of the SubGenius functioned as an organized form of Culture Jamming. Media culture and cultural institutions were ultimately being disrupted through a clever Church scheme of playful anti-consumerist protest. It's as if they were giving media, the mainstream culture and consumerism a bit of its own medicine and used their own mechanisms against them, whether in the form of mockery or as direct disruption.

In any case a lot of the activities of people involved with the Church of the SubGenius were also related to music. A radio show called Hour of Slack, hosted by Ivan Stang, has been going on for decades and can still be heard to this day. The Church had interest for music that was manifested through home-taping culture and mail-art. Those were often people either using media in an autonomous way or people who were actually manifesting recordings from their self-created fringe-world away from the mainstream.

The Swinging Love Corpses were one of the bands of the Church of the SubGenius that played over thousands of hours of jam-sessions. They also played many live gigs and released cassettes that were distributed thoughout the global home-taping circuit. In a way they come from a similar realm of American mockery and/or weird groups using absurdism or culture jamming like The Residents, Negativland, Frank Zappa, Butthole Surfers, Blacklight Braille and many others. Ofcourse Pop-Art seems to have been one of the first manifestations of this kind of post-war capitalist mockery and reversal of media powers in general.

I guess there's a lot to check out more elaborately for yourself within all of this, specially regarding today's perpetual digital media simulacrum trip and the post-reality virus age...But for now here are The Swingin' Love Corpses providing their great mutoid funk, zappa-esque manoeuvres, space jazz and trippy jam explorations for the end of the world détournement party which was already recorded some 30 years ago.