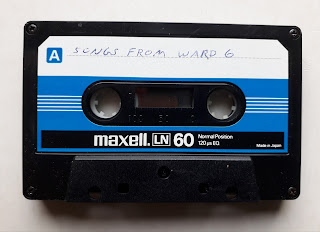 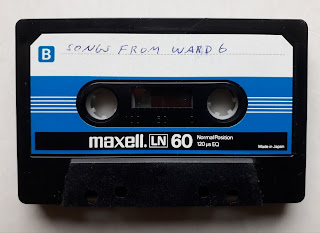 So I've posted something before that was on the mysterious Slang Tapes label, a US cassette label that was dedicated to strange humorous free-jazz and improvisation. That live improvisation cassette fell a little flat amidst all the home-taping music on this blog, but it was strange enough to share. I actually try to redefine that eternal crescendo of music posts of which one thing should be constantly better than the previous. In all actuality all of this musical output knows its own historical context, in its own place and time. There are different musical styles or approaches but a lot of it shares an underground ontology or a deviancy to whatever the dominant culture has been pushing. That's why it remains important that different types of music are represented on the blog.

In any case, the previously shared Slang Tape release is very different from this one. That cassette came from Allentown, Pennsylvania, so I assumed that the label was based around that area as well. However there is no real confirmation. Also I don't know which musicians were actually part of the Songs From Ward 6 project.

Songs From Ward 6 is a stunning piece of American avant-garde music. It sort of balances on the minimal music tradition within modern composed music, jazz or other more trained musicianship traditions, but at the same time it's far out in its experimentation while displaying absurdistic lyrics and vocals. It also presents amazing crystal-like cosmic ambient synthesizer manoeuvres with a deep sound, creating different hypnotizing grooves. It eventually even ventures into some self-explored ethnic sounds. Not too far fetched from some of the more unclassifiable acts that were included on the NWW list.

I'm pretty sure that this was made in the early years of the 80's, but it clearly has some ground in the weird 60's or 70's music traditions too. From Silver Apples to Cromagnon and from Care of The Cow to the Los Angeles Free Music Society, the music by Songs From Ward 6 once again emphasizes the endless eclectic creativity and inventiveness of musical output that existed within the fringes of American underground music culture during the second half of the 20th century.

A great piece of lost music! Also any additional information on this would be highly appreciated!