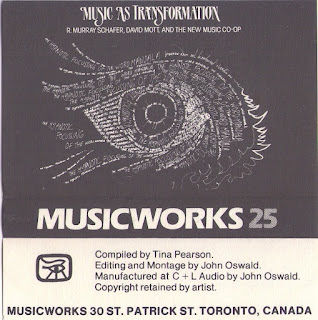 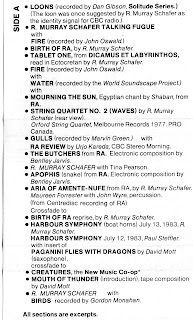 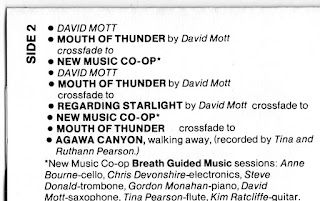 Here we have another cassette that was released by the Canadian magazine Musicworks that focused on Canadian avant-garde music since the late 70's. Musicworks was founded by Andrew Timar and John Oswald in Toronto. They released dozens of cassettes that accompanied the Musicworks magazine that published on the relation between science, technology, ecology, sonic environments and music.

Music As Transformation was assembled by composer and sound artist Tina Pearson in 1983. It features edits and excerpts by different Canadian composers involved with experimental music, field-recordings, abstract composition and also contains sequences of spoken discourses. Amongst some of the composers that are present are R. Murray Schafer, known for his concept of acoustic ecology, David Mott, a baritone saxophone player and composer from Toronto and Gordon Monahan, a Canadian pianist, visual and sound artist.

The compilation creates its own unfolding narrative blending natural field-recorded sounds with avant-garde composition within an existential or reflective framework based on the experience of environments and life-cycles. It takes the listener on a subtle transformative trip through sounds of folk traditions, water, rain, fire and other ecological elements weaving in and out of those sound-spaces constantly going back and forth from improvisation and electro-acoustic music into the dark yet sunbursting universe.

A beautifully assembled piece that can't be titled anything else but Music As Transformation. It reminds me a bit of the music by Darren Copeland that was published on the blog some time ago. Even though the extensive tracklist is available, the cassette has been unindexed to maintain its natural flow.

Music As Transformation - The hypnotic focussing of the word mandala