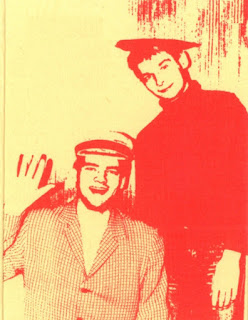 The Gefährliche Klons (The Dangerous Clones) were a NDW band formed in the city of Marburg during the late 70's by the core duo of Uwe Linke and Exo Neutrino. They had many different Clone disguises and started to do their own music experiments inspired by Der Plan and the Geri Reig principle combining primitive electronic sounds with demented acoustic tunes and melodies while also using toys and other lost and found non-instruments.

These recordings are from an obscure collection of overdubbed NDW tapes I found at some point years ago. Too bad we can't see the original covers but chances are very small that we will ever see them. I couldn't find any information on these presumed cassette releases, not on Discogs nor on the Tape-Mag. In any case these recordings mostly collect the solo works by Uwe Linke who also did the Markenzeichen XY project as well as Kinder-Klons. A couple of these Kinder-Klons tracks were also collected on the extensive compilation cassette 40 Funkuchen that was released by Dutch cassette label Trumpett (from the small town of Heiloo), but some tracks are unknown.

Lastly I added an unknown live performance by The Gefährliche Klons from another one of those dubbed cassettes which now completes all the leftover material I have by them. However, it would be truly amazing if someone could provide some other unknown cassettes from their own Wir Wollen Nur Dein Bestes Bänder label.

Get all the leftover tunes HERE