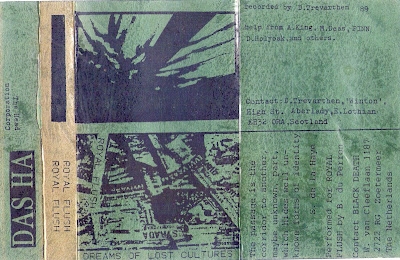 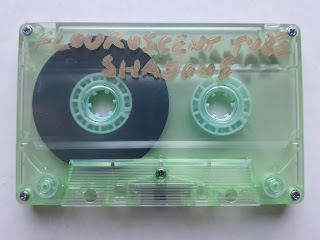 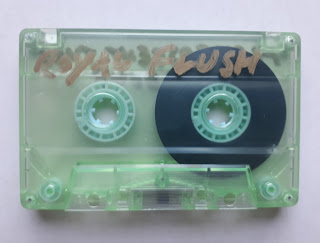 Here's an odd but great one. It took me some time to decipher this cassette since the cover kind of confused me at first. In any case it seems to be a split tape between Scottish home-taper Dion Trevarthen (also known as Square Sun) and Royal Flush, a home-taping act that was released by the Black Death tape label from the small town of Zoetermeer, The Netherlands. Black Death was created by Marcel Tuijenburg. A label which a.o. published compilations of the international home-taping community. The music on this cassette by Royal Flush seems to have been a solo effort by B. du Perron who creates a long dark ambient soundscape.

The other side of the tape consists of some dazzling hypnotic acid drenched electronic music by Dion Trevarthen. Hailing from the village of Aberlady, East Lothian, Trevarthen was part of a psychedelic space-rock group called Sponge along with his two brothers. He also released his own electronic music under the name Square Sun on various international tape labels. One of the most notable releases was the Tierversuche, Das Perfekte Konzept Der Selbstvernichtung tape on the German cassette label IRRE.

Fluorescent Tube Shadows is a mind-bending psychedelic piece of electronic home-taping music. There are many electronic textures, radio waves, rhythms and strange transitions going on. I recommend hearing this loud on some serious speakers and not just some screenspeakers. It has a very immersive deep sound that almost absorbs you. Within home-recordings it illustrates the transition of the 80's minimal synth sound into some of the new electronic music of the 90's, but somehow remains ungraspable. Some other acts that might be alike are Ras.Al.Ghul from Portugal or Delta-Sleep-Inducing Peptide from Germany. Or or or.

It would be great if some label would reissue some Square Sun music, but I guess it's wishful thinking.