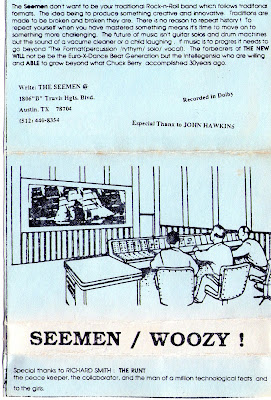 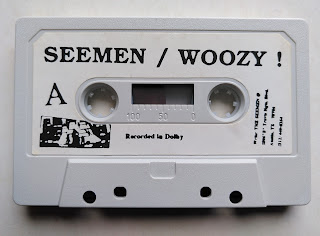 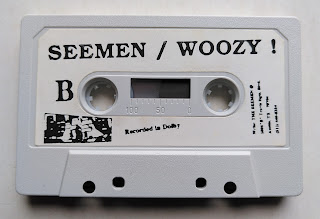 Originally from Austin, Texas, Seemen is the collaborative effort of Kal Spelletich and some forty odd art drop outs and extreme technology inventors who enjoy building extreme machines and robots that they allow their audience to operate.

Since the late 80's and 90's Spelletich has been doing performances with Seemen and the notorious Survival Research Laboratories. Through the extremes of technology, the building of giant metal robots, pyrotechnics and other inventive dangerous constructions many incredible installations have graced both festivals and urban wastelands. Simultaneously the musical output connected to that has been an important element. Inevitably the clinging of metal, fire and flames and other robotic mechanisms create sounds, Seemen also made some really special cassettes that were circulating in the home-taping culture.

Within that late 80's and early 90's realm quite some urban area's were not as gentrified as they are today thus able to provide some space for these greater machine endeavours. The art and its surroundings played an important role on each other. Not only because of the artistic nature, but also because the artists would sometimes work on these giant living sculptures and robots for months. Therefore many of the artists started to become part of the surrounding communities and meet people who, in their turn, would help on some of the projects and vice versa. For example during their time in Amsterdam a collective like Survival Research Laboratories helped barricading some squats showing support during their eviction. A performance art group like the Mutoid Waste Company in England started to engage with the free party rave scene. Eventually they even established their own village called Mutonia in Italy. These are just some examples, but there are many more stories. In the new millenium this type of art has moved to festivals because the neo-liberal globalized urban environment leaves less and less space to be engaged with.

Woozy! was a self-released cassette by Seemen from 1991. From the cover:

The Seemen don't want to be your traditional Rock-n-Roll band which follows traditional formats. The idea being to produce something creative and innovative. Traditions are made to be broken and broken they are. There is no reason to repeat history! To repeat yourself when you have mastered something means it's time to move on to something more challenging. The future of music isn't guitar solos and drum machines but the sound of a vacuum cleaner or a child laughing. If music is to progress it needs to go beyond The Format (percussion/rhythm/solo/vocal). The forbearers of THE NEW WILL not be the Euro-X-Dance Beat Generation but the intelligensia who are willing and ABLE to grow beyond what Chuck Berry accomplished 30 years ago.