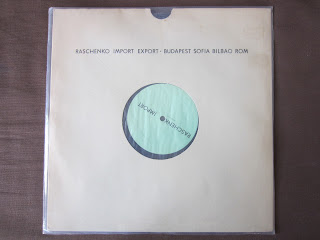 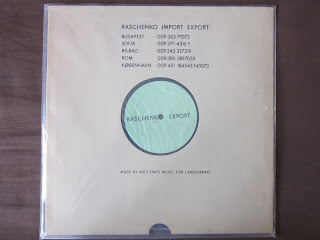 So next stop is this quite rare and unknown 12 inch vinyl by the Danish band Raschenko. Actually, this is the same band as the amazing Ivor Axeglovitch which has been posted ages ago here on Mutant Sounds to which we mortal souls owe everything we have (unfortunately a lot of links are dead now). Unlike Ivor Axeglovitch their beafheartian art damaged first albums, Raschenko tends towards a more plain New Wave sound and is less elaborated in its mingling of wacky guitars and dada-esque collage. Still the old records also display a minimal synthy and new wave side, for example the song  "Moscow Beach Club" at first makes you think that you're up for some amazing interpretation of Cultural Amnesia's "Materialistic Man" ( I really wonder...).
Anyway, this Raschenko record has two nice songs. It resembles a kind of music Palais Schaumburg would play if they tried to copy New Order while being Danish art students. The "export" song could easily also be a song of the dutch band Niew Hip Stilen, which is still one of my all time favourite groups.
This has been uploaded before on youtube, but only watched 20 times, so I thought I'd do a rip and give it extra attention. Hopefully someone will reissue the whole discography of Ivor Axeglovitch on vinyl soon as the albums are impossible to get and issued in editions of 100 copies. This band is up there with the best ones from Denmark like Moral and Mind Pollution.