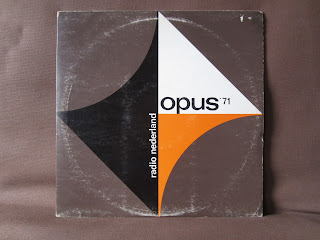 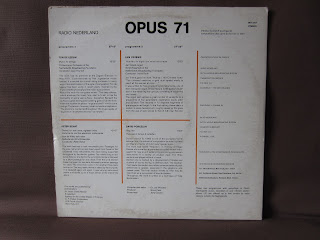 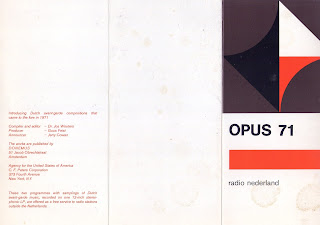 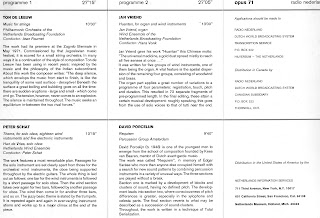 After Opus '70 which I posted a while ago here's Opus '71, another showcase of modern composed Dutch composition this time from the year 1971. The Opus series started out in the mid-sixties and went on all the way to the end of the eighties. They were promotional copies send to foreign radio stations to show contemporary developments in Dutch music. For this reason every composition has an introduction in English. The Opus series were not regularly for sale which makes them quite hard to find.

The featured composers on Opus '71 are Ton de Leeuw, Peter Schat, Jan Vriend and David Porcelijn. Their pieces are quite freeform and spacious resulting in unexpected sound movements and strange sonorous adventures. I like these compositions because I can listen to them in a less rigid way than regular classical music because of their improvisational components. Also due to the use of electronic instruments and electric guitars in some of the pieces a multi-layered sound is created. Especially programme 2 is very weird and takes on some strange imaginative conceptual ideas in music which you can read about on the insert.

It's remarkable that even here in Holland there isn't that much public interest or exposure for this type of Dutch music and composition. The Opus series create a great opportunity to dig into the surprising world of Dutch modern composed music of which many compositions are already quite forgotten.