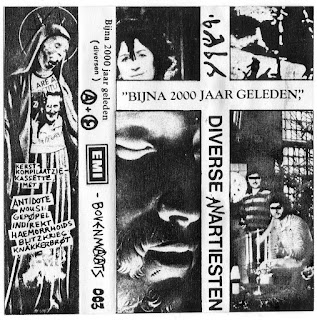 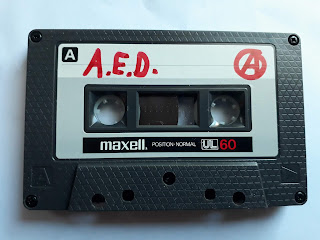 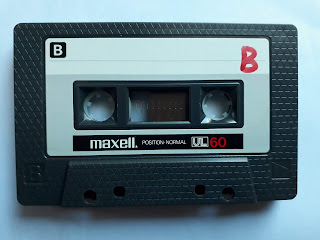 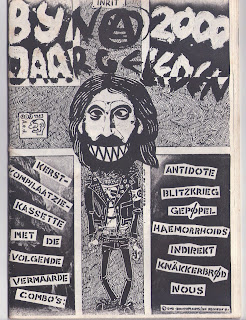 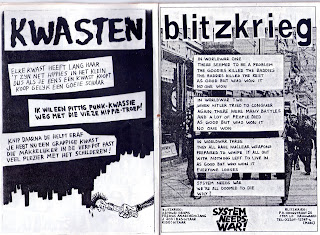 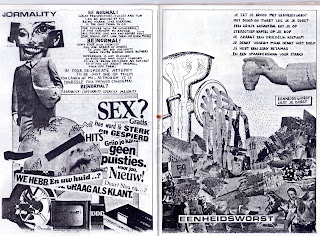 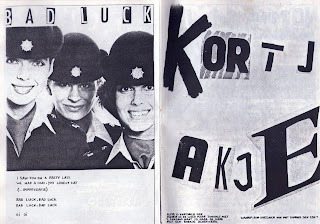 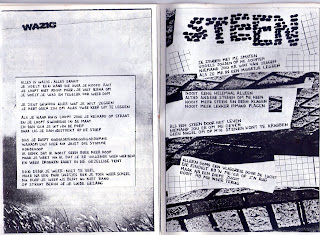 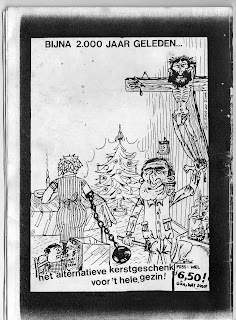 Merry Christmas and an Archaic New Decade to all friends and followers of the blog!

Wait a second, is that Jesus? Portrayed as a punk? Well, that will always be a bit of a tricky analogy within punk circles and beyond. But anyhow! Bijna 2000 Jaar Geleden (Translated: Almost 2000 years ago) is a rare Dutch (hardcore) punk compilation from the first hour compiling different punk bands from smaller cities of The Netherlands. It was released by the Volendam based punk label Anti-Esthetische Dienst (anti-esthetic service) created by Niels de Wit who is also compiled on this cassette with his band Gepøpel.

Ironically Volendam, of all places in the Netherlands, is actually mostly known for the worst of the worst commercial sound of Dutch schlager pop-music of which I won't give any examples here. It's a tricky and fairly untrue statement but I would say that most real and influential punk from The Netherlands from the early days did not come from the big cities, but more so from small places. The Ex, one of Holland's most important real anarcho-punk groups also partially came from the village of Wormer, which tells us something.

Bijna 2000 Jaar Geleden came out as the alternative Christmas gift for the whole family for the end of the year holidays of 1983. It mostly consists of live recordings of punk bands that either sing in Dutch or English. The songs have typical punk subjects like anti-religion, anti-establishment and the opposal of the average daily life in society. Short and simple tracks often badly recorded as they should have been. One of the highlights is the track "Kortjakje" which is a famous Dutch children's song about Kortjakje, a poor and maybe alcoholic woman who is always ill throughout the week except for Sundays when she goes to church. The punks invert the plot of the song in the booklet and ask the question: why can't Kortjakje be ill on Sundays?!

This cassette came with an extensive booklet containing DIY collage, visual information on the lyrics of each band and ofcourse some drawings on the Christmas theme. As always I added the scans to the file below. This is another nice relic from the Dutch punk scene. More of the A.E.D. label and dozens of early Dutch punk tapes can be found in the No Longer Forgotten Music archive (it requires some searching).

What an amazing ride it was musically in 2019. In terms of material it looks very bright for the blog in the next year. I might even have larger opportunities coming that would lead to a great amount of treasures of obscure music but we have to wait how that unfolds. But even now I can almost not believe some of the stuff that still lies around here, so I'm generally content. A decade ago when I was a teenager I was dreaming of creating a blog like Archaic Inventions and the surprising thing about it is that I managed to make it happen somehow.

2020
An additional music discourse that I want to introduce to the blog in the next year is a.o. the attention for the underground origins of dance music, to retrace some of its autonomously conquered components and explore a bit of the ethics away from what became part or has always been part of the new era of neoliberal gentrified club culture. Also I felt I had to bring some more punk music to the equation as you can see, because I find that the music zeitgeist has been marginalizing some of the important DIY functions lately compulsively changing the view on the so-called creative conditions for a praiseworthy piece of music to exist. It's a tendency that also divides certain musical genres from their often common origins and polarizes the music scene more than it brings people together. The world has changed.

I'm working on a couple of reissues with great (reissue) labels (Discos Transgénero, StroomTV,  Futura Resistenza etc.) writing liner notes for them (more on that soon). Also I will publish a cassette of my own music (old and new) soon in the beginning of the next year and hopefully another album later on. Maybe I have one or two other surprises up my monkey sleeve. Anyway, I'm just doing what I can do, or something like that. I just want to say much love to you all and I'm grateful to all you listeners out there. And grateful for all you talented people in and out of music! Also for the great amount of creativity on the upperground, but realize that the underground has to receive some sustainable care too. Really more than ever.

So ofcourse (far away from this blog) a special thank you to the marginalized music multitude, the people showing local resistance, music activists and the unpaid or the unruly who keep organizing events and concerts, who are making their unorthodox music, who keep pushing under difficult circumstances. Keep it weird and feel comfort in the fact that you feel that you don't want to uphold an image publically (online), we're all connected.

A last special thanks to all the music blogs out there still doing what they do best. It's a huge effort, in free time, for the love of music. Respect!