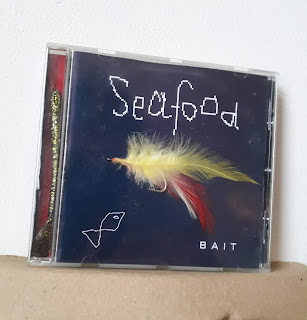 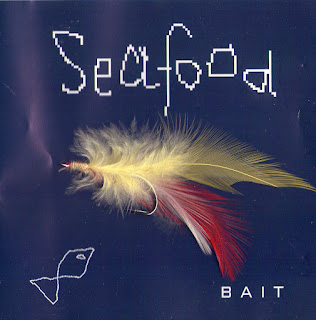 What we have here is a great obscure 90's release from Holland. Seafood was a short-lived group that consisted of four jazz and improvisation musicians based in The Netherlands: Canadian musician Alan Laurillard (saxophone, voice and sampler) and Dutch musicians JB Bollen (violin, voice, sampler, synthesizer), Michiel Scheen (voice, synthesizer) and Chander Sardjoe (percussion). All of them were heavily involved in the Dutch jazz and improvisation scene and have been releasing numerous albums throughout the years. Chander Sardjoe also collaborated with the Belgian ethno-avant-jazz trio Aka Moon around the same time when Seafood was active.

Seafood's Bait came out in 1998 in limited quantities on CD with a fishhook with coloured feathers attached to its cover and a small plastic fish in the jewel case. The group described their music in the booklet:

Seafood is a new music group that creates a synthesis between culture and subculture, between improvisation and academism, between small brains and underbelly. Result: House-Techno-Hardcore-New Music-Jazz-Impro-Drum and Bass-Fusion.

Definitely an accurate description. This is a musical adventure that blends in so much musical talent and styles from worlds far beyond that I slowly realize that this could be one of the greatest albums from The Netherlands from the 90's in general.

Each track on the album is composed by one of the four musicians of the group. Seafood inventively tie together humoristic improvisation, future jazz, sample-mania and different electronic dance music styles into something of mind-boggling alien creation of almost Boredoms proportions. It's also reminiscent of Uwe Schmidt's (Atom TM) Lisa Carbon project of the 90's where latin jazz and rhythms were blended with electronic instruments and dance music. Obviously there are more examples of that 90's musical realm that often got labelled Future Jazz or Nu-Jazz back in those days, but this came to mind.

Moreover, Seafood is what I imagine to be the future sound of what great Dutch bands like Niew Hip Stilen or Kiem had been playing a decade earlier. This is some far out stuff! Another very little known album from Holland that deserves more attention!