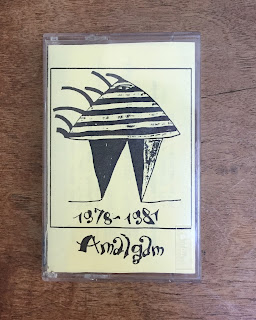 Amalgam 1978-1981 features the recordings of a series of concerts of this project led by the Czech drummer and percussionist Vlastimil Marek, along with a variety of guests that range from renowned Czech progressive rock musicians and ethnomusicologists active in the country’s underground scene to a rare participation at that time of an international guest like Mohan Lal.

The recording on the A-side of the tape stems from Amalgam’s participation at the Prague Jazz Days festival held at the Lucerna concert hall on the 19th may 1978. The occasion brought together Marek’s orientally inclined percussive music with the members of the progressive rock band Švehlík, which included Pavel Richter, Luboš Fidler and Alexandr Hajdovský along with the participation of the Indian tabla player Mohan Lal, one of the first foreign guests to play the festival. This first part depicts the inclination towards non-western musical traditions, in this case by Marek and its fusion with avant-garde rock bands like Švehlík, a style at that time already popularized in "the West" by musicians like John McLaughlin or bands like Tri Atma and Embryo for example. In a sense, such music is representative of a legacy of occidental musicians prone to experiment with oriental modes and percussion in order to escape from the constraining aspects of western music towards free and varied forms of music incorporating a clear tendency towards improvisation.

The first half of the B-side was recorded at the sports hall Na Folimance in Prague a year later featuring Czech music-ethnologist and multi-instrumentalist Jiří Mazánekon on acoustic guitar and voice, and Milan Valenta on the violin. The second half was recorded at Baráčnická Rychta also in Prague and the liner notes only name Vlastimil Marek’s use of tapes and percussion along the participation of a series of unknown guests.

While working on his solo percussion projects, Marek has also played with well known rock in opposition bands like MCH Band, Švehlík and Extempore, all of which have included Pavel Richter as a member. In this sense we may appreciate the diverse network of musicians of different genres which participated in the country’s underground scene, resulting in the creation of a fertile terrain for the development of non-conventional approaches towards a free music conception despite the ungoing political repression of the country at that time.

The first side of this tape was released as the second half of the CD Švehlík & Amalgam – Lucerna 19. Května 1978 in 2017 by Galén, a book publisher and record label from Prague.