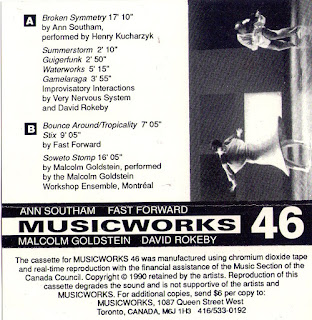 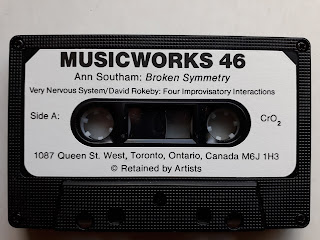 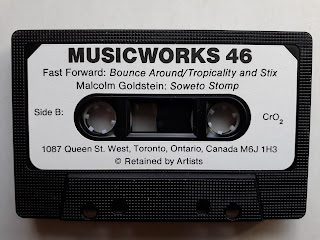 Here we have a compilation cassette that was released by Canadian magazine Musicworks that focuses on contemporary avant-garde music since the late 70's and is still active to this day. They released dozens of cassettes that accompanied the magazine thoughout the decades.

Musicworks 46 starts with a piece of synthesizer played live by Henry Kucharzyk. The piece is composed by pioneering Canadian female electronic music composer Ann Southam. Since the early 70's she has been involved with electro-acoustic composition in combination with dance and choreography. Her album Sky Sails from 1973 which she made in collaboration with Seán Ó Huigín is a highly sought after record of electronic composition and modern composed collage. It's regarded as one of the more important recordings of Canadian experimental electronic music of the 70's.

The second part of the A-side continues with installation soundworks that were given the name "Very Nervous System". It's a multimedia installation focusing on bodily movements and sound recorded by Canadian artist David Rokeby. There is a sense of artificial interpretation of organic and natural sounds. Those themes are explored in pieces as Waterworks or Gamelaraga. That conceptual sonic exploration of pseudo-natural themes is also used by Fast Forward, a tribal rhythmic project by the American percussionist Paul Wilson, who in this case mostly uses a Trinidadian steel drum in different rhythmic manners.

The compilation ends with a contemporary composed jazz piece composed by Canadian violinist Malcolm Goldstein dedicated to the South African township of Soweto. The piece titled Soweto Stomp was written in 1985 to commemorate the Soweto uprising in 1976 and is dedicated to the black people of South Africa in their struggle for freedom and equality.