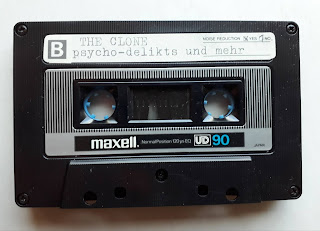 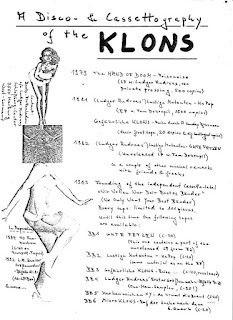 Here is another obscure tape by the blog's favorite absurdist and disruptive Kassettentäter recidivists Die Gefährliche Klons (The Dangerous Clones). This particular recording comes from an obscure source of overdubbed NDW cassettes I got hold of a long time ago. The Gefärhliche Klons were formed in the city of Marburg during the late 70's by the core duo of Uwe Linke and Exo Neutrino. They had many different Clone disguises and started to do their own music experiments inspired by Der Plan blending primitive electronic sounds with demented acoustic tunes and melodies while also using toys and other lost and found non-instruments.

Even though this material was copied from its original source during the 80's and consequently somewhat less high in audio fidelity without any cover artwork, chances are slim that an original of this will actually surface, so I decided to share this anyway. Moreover, Psycho Delicts by "The Clone" might be one of the most balanced, intricate and serious music efforts I've heard by the Klons so far. It's as if finally a German Krimi series goes absurdist Neue Deutsche Welle and the special police unit is trying to catch a mysterious mob of dangerous clowns equiped with cassette decks and casio keyboards who are roaming the music underground and leaving an idiotic soundtrack as their only trace. Obviously undermining the success story of the police. Quite reminiscent of the neurotic and paranoid subversive world of The Cop Killers: a conceptual Italian Sci-Fi fueled anti-authoritarian and fugitive home-taping project that was created a.o. by mail-artist Vittore Baroni in the early 80's.

The short Psycho Delicts cassette doesn't really like to compromise, yet it's unquestionably humorous while containing some real musical depth. Conceptually indeed similar to some of the creations by The Residents, Der Plan or even Blacklight Braille.