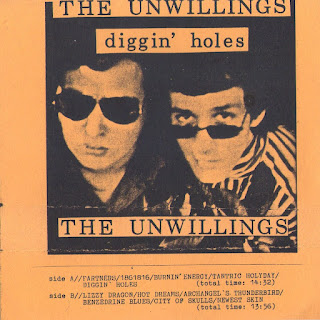 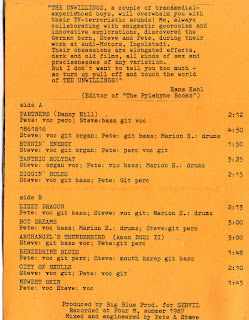 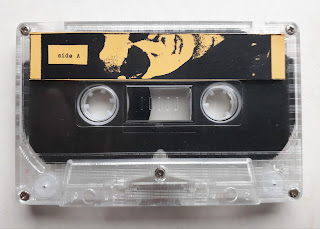 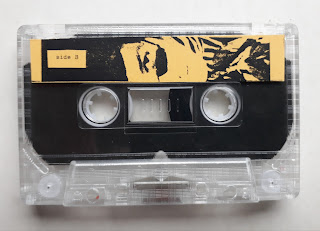 According to the review on the cover of this cassette The Unwillings were a duo comprised of the German born Steve and Pete who were working at Audi-Motors in the German town of Ingolstadt. Whether any of that is true remains unknown, however it really doesn't matter.

The Unwillings were a Velvet Underground influenced band that released only one cassette on the Servil label that was created by bedroom-pop and home-taping pioneers Fit + Limo from Altdorf, Bavaria. Their rhythm box driven neo-psychedelic fuzzy garage tunes are in line with other bands from the time like 39 Clocks (Also from Germany, later incarnated into The Phantom Payn), The Rest (from Naples, Italy), Hi-Fi (from Amsterdam, Holland) or any other brown sugar dripping, sunglasses after dark, vintage fuzz pedal to the metal, slowly burning cigarettes, shiny boots of leather bands. These guys must have had records by Spacemen 3 and The Monks at home too.

The Unwillings also play a cover of Amon Düül II's Archangel's Thunderbird which underlines their neo-psychedelic spirit. Actually, before Krautrock propelled the world into cosmic realms with musical innovation that we could have never imagined, many groups from Germany from the mid- and late 60's already heralded that near future to come. A series like the Prae-Kraut-Pandaemonium provides a great overview of that realm for those who are interested. With the neo-psychedelic revival of the 80's everything kind of went full circle.

Anyhow, as for now, here are The Unwillings for everyone who remains unwilling!