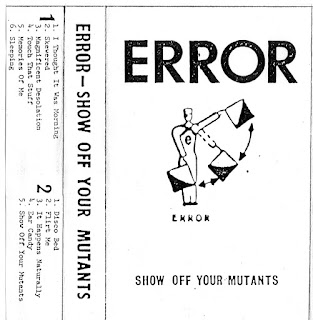 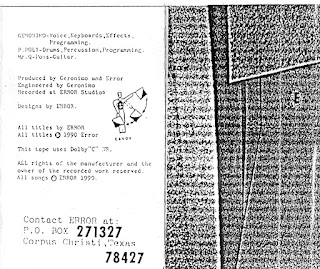 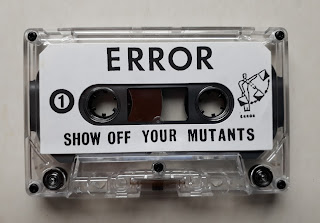 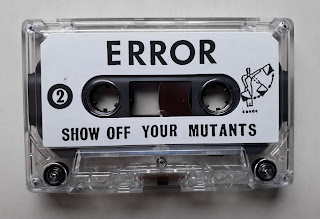 Error was an electronic music group from the small sea town (for American standards) of Corpus Christi in Texas. The group consisted of Geronimo (voice, keyboards, effects and programming), P. Poly (drums, percussion, programming) and Mr. Q-Pons (guitar). I suppose they were a home-taping group, but I don't think they were heavily involved in the more established cassette culture. Also since this cassette was released in 1990 the international cassette culture was ofcourse already different than it had been during the previous decade.

The music by Error is a nice cocktail of rhythmic electronic minimalism and EBM type tracks with lots of cut-ups and samples. Some fragments have religious Christian aspects, some are taken from unknown broadcasts and we even hear William S. Burroughs on one of the tracks. It's quite an interesting mix of tracks with a strange collage-like nature recorded in a peculiar but interesting manner. The production seems to be a bit weird at times, maybe somewhat dated, maybe recorded through some computer (Amiga?) from that time, but it does give a strange depth to the sound.

All in all some nice electronic music that reminds me of bands like The Genetic Terrorists (T.G.T.) or Severed Heads. I have no idea whether Error released more music or whether they were known for any live appearance.

Show off your mutants and get it HERE!