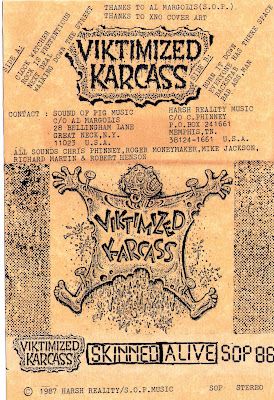 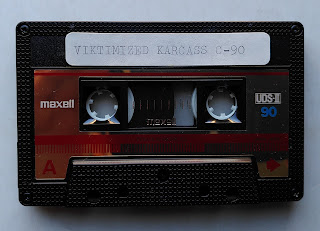 Viktimized Karcass was an experimental underground band from Memphis, Tennessee that was strongly embedded in the cassette culture of the 80's. The band consisted of Chris Phinney (founder of the Harsh Reality cassette label), Michael Thomas Jackson, Richard Martin, Robert Henson and Roger Moneymaker. The music consists of psychedelic jams, electronic experimentation, tape-loops and other improvised sounds. Most of the members were also involved in solo projects and contributed immensely to the shaping of the cassette culture of home-tapers. Viktimized Karcass released many cassettes on a variety of international cassette labels.

Skinned Alive was released through Sound Of Pig, a pivotal cassette culture label from New York that was created by Al Margolis (aka If, Bwana). There are some far out space rock jams on here. It reminds me a bit of Smersh or Sponge. Wonderful stuff.