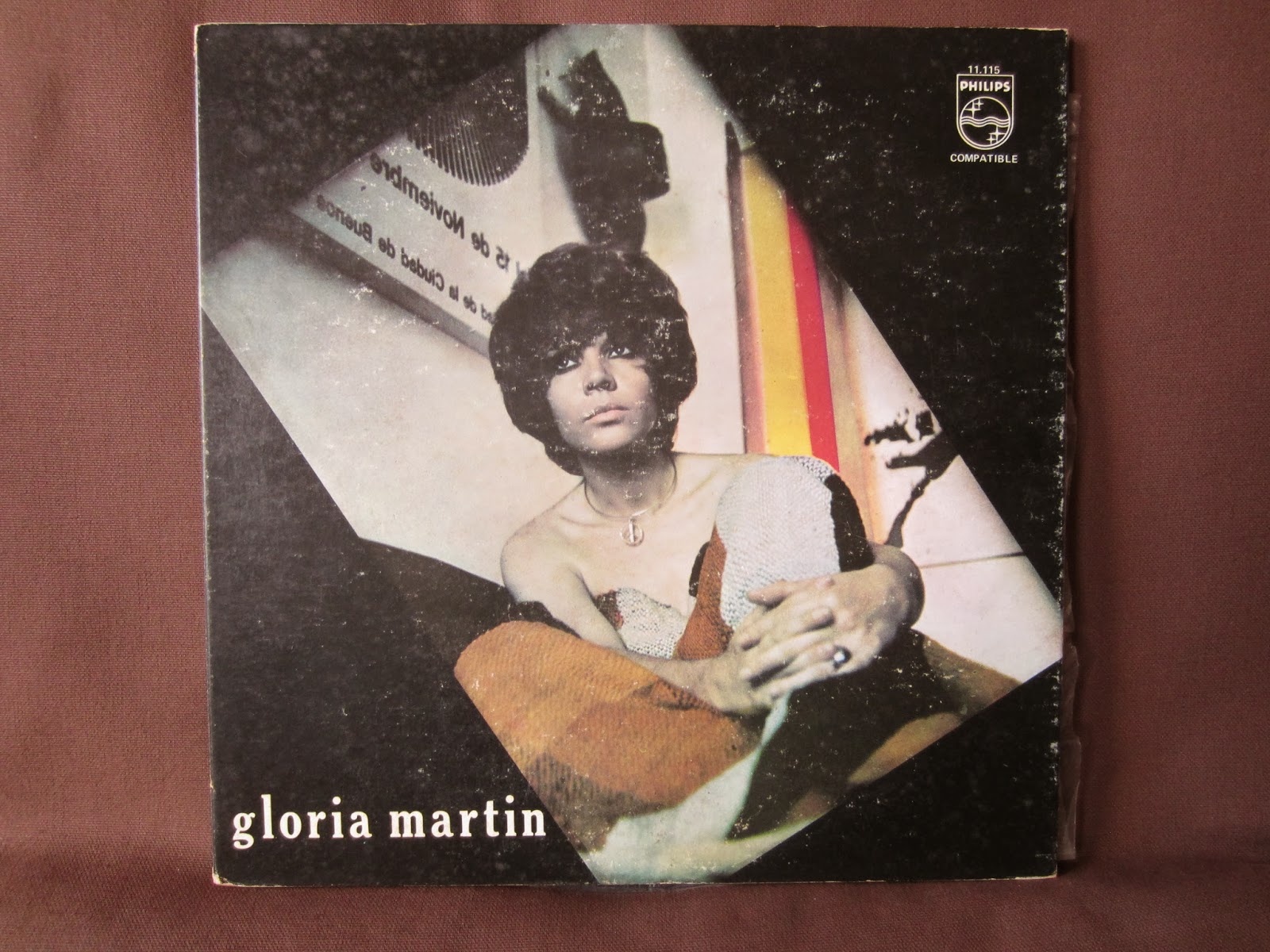 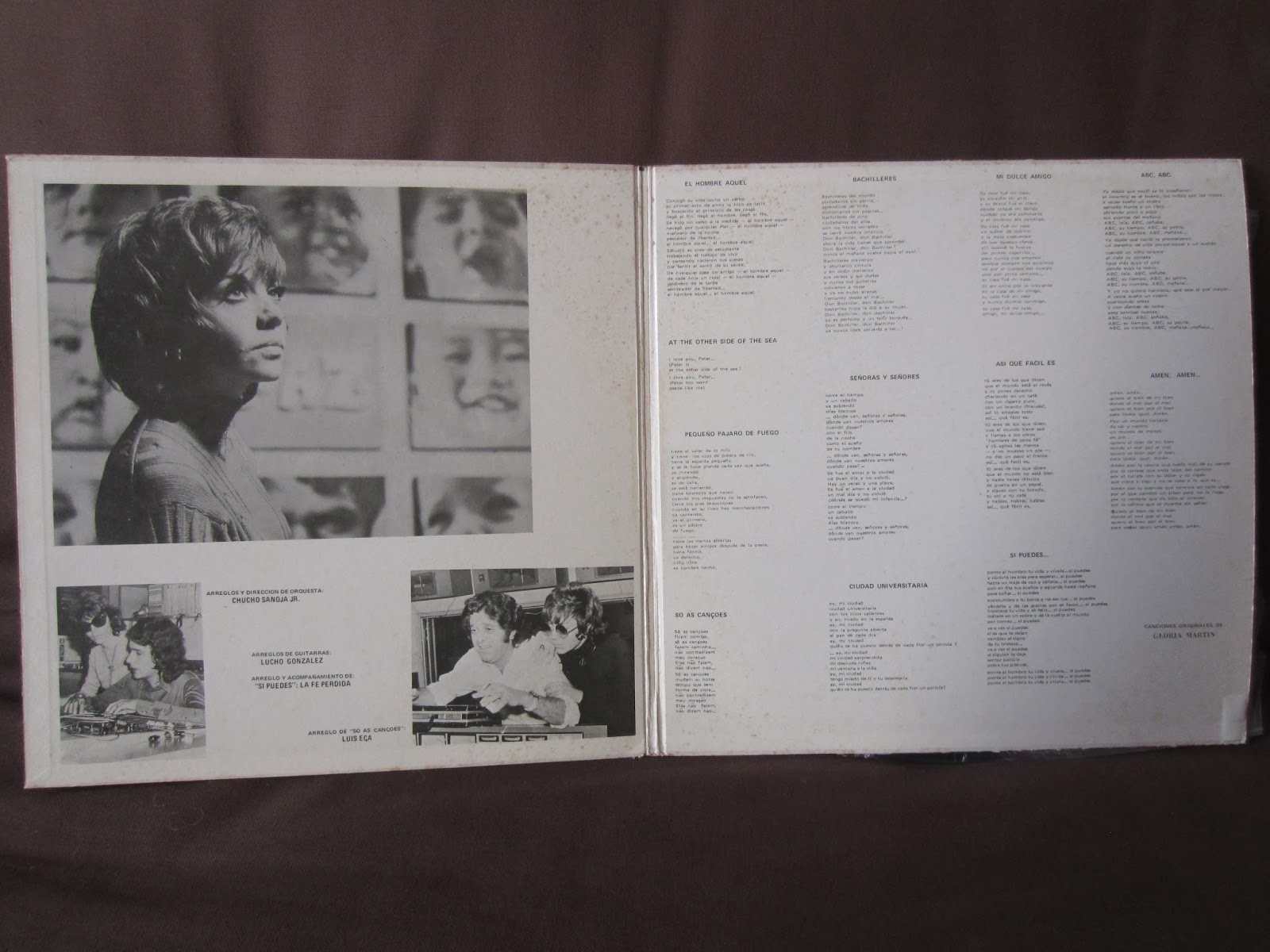 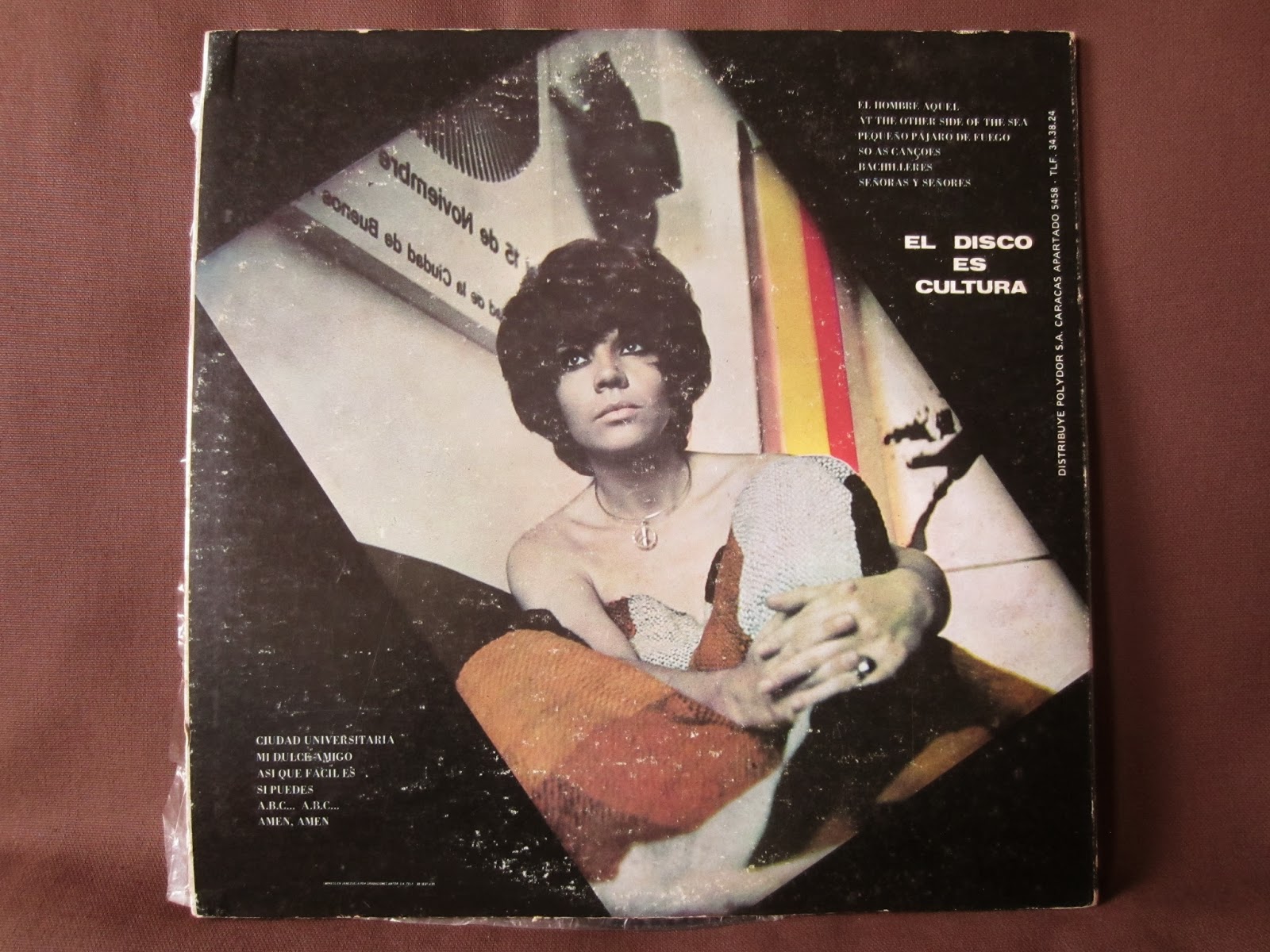 To me this self-titled record of Venezuelan singer Gloria Martín is the absolute Holy Grail of all Venezuelan records. Actually Martín wasn’t born in Venezuela, but in Madrid and moved to Venezuela with her parents when she was nine years old. So she basically became Venezuelan. She studied philosophy and letters at the Universidad Central de Venezuela (UCV), she graduated in Arts and got a Ph.D. in cultural history.  At the same time she started a career as a singer and in Venezuela she’s mainly remembered for her Nueva Canción music. Nueva Canción was a typicial left-wing orientated musical style from Latin America (and Spain) addressing social problems in the society, usually songs on acoustic guitar highly influenced by the revolution in Cuba. Moreover it was a genre which tried to define the own identity of Latin American countries without being defined by colonialism, neo-colonialism or American influences. In Venezuela the Nueva Canción protest music was very much connected to student movements in Caracas of the sixties and seventies. Other representatives in Venezuela were people like Alí Primera, Soledad Bravo and Xulio Formoso. Gloria Martín also wrote a book about Nueva Canción in Venezuela in 1998 entitled “El perfume de una época (la Nueva Canción en Venezuela)” which I’d love to have to be able to tell more about this movement. Here you can at least find a very interesting article in Spanish about Gloria Martín and her role in the Nueva Canción Venezolana.

But this record is not one of Gloria Martín’s acoustic singer-songwriter protest albums. It’s more of an artistic showcase and does reflect the social environment, but doesn’t involve too much politics. This was an orchestrated musical masterpiece and so many years later it surprisingly shows that everything rightly got together at the moment when that recording was made. Sometimes cultural history gets captured in a recording that reflects the essence of a certain moment: true artistic pearls that are the perfect product of their time in every sense. 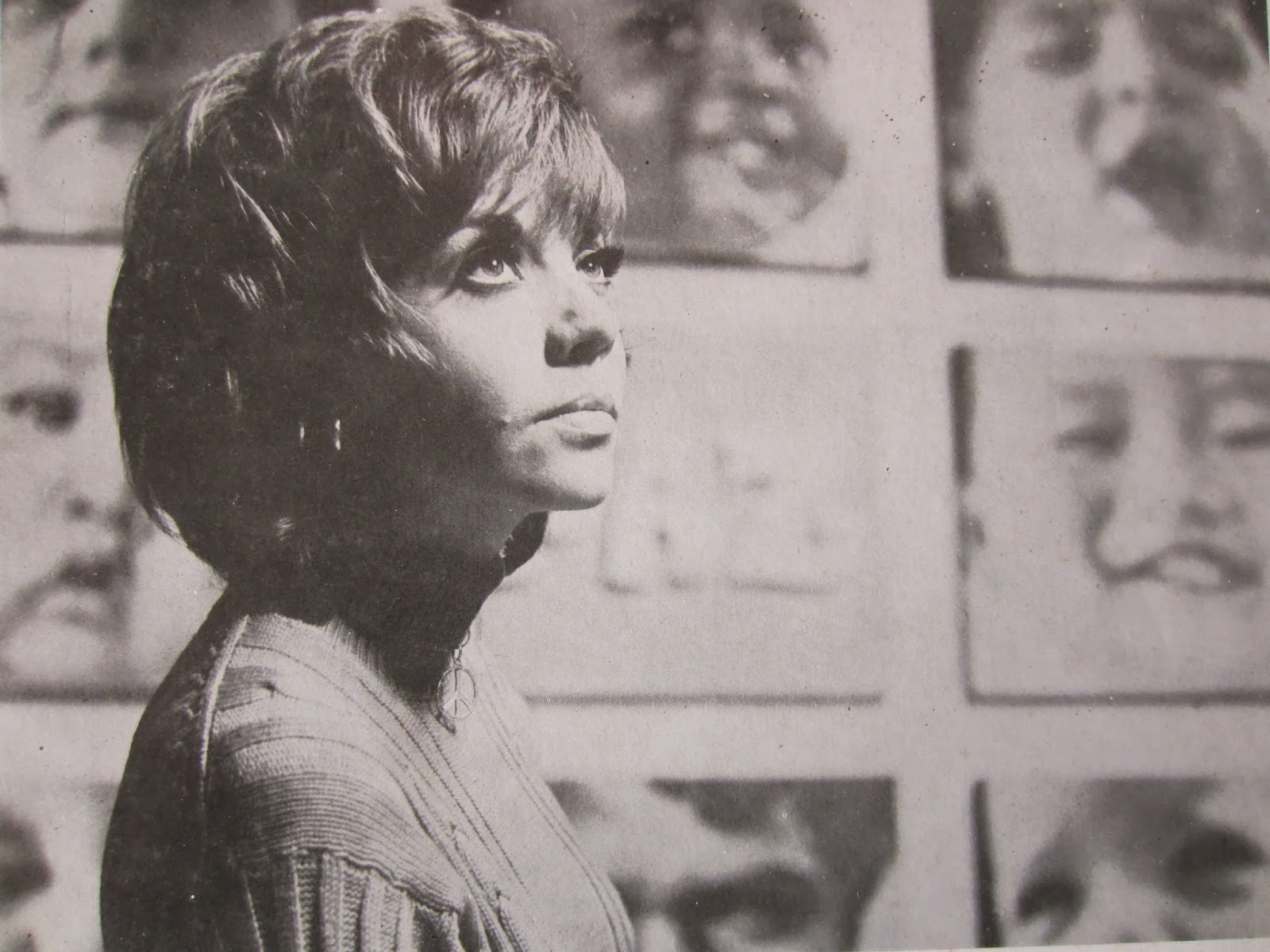 Paz
The compositions of the orchestra led by Venezuelan arranger Jesús Chucho Sanoja cover all the best musical styles from the early seventies and at the same time create the most amazing conditions for the beautiful voice of Gloria Martín. She was 26 years old at the time she recorded this album full of poetical beauty. Also she wrote all the lyrics herself. The album contains orchestral arrangements, jazz, bossa nova, collage, sound-effects, folk, early seventies rock influences and everything in between. It’s a highly sophisticated record that merges all the nostalgic beauty of Venezuela in the very early seventies (when people were still Damas y Caballeros) with student revolt, impressionistic decadence, sensuality, poetry and intellectualism. Considering all these dimensions, you have to be a really refined soul to be able to comply and apply these things as a youthful person going through university and at the same time being an artist. Conceptually, the album has a lot in common with certain progressive orchestrated music made for singers with studio effects and studio revisions like Serge Gainsbourg’s and Jean-Claude Vannier’s Histoire de melody Nelson (even length-wise!), but then in a Latin American context. 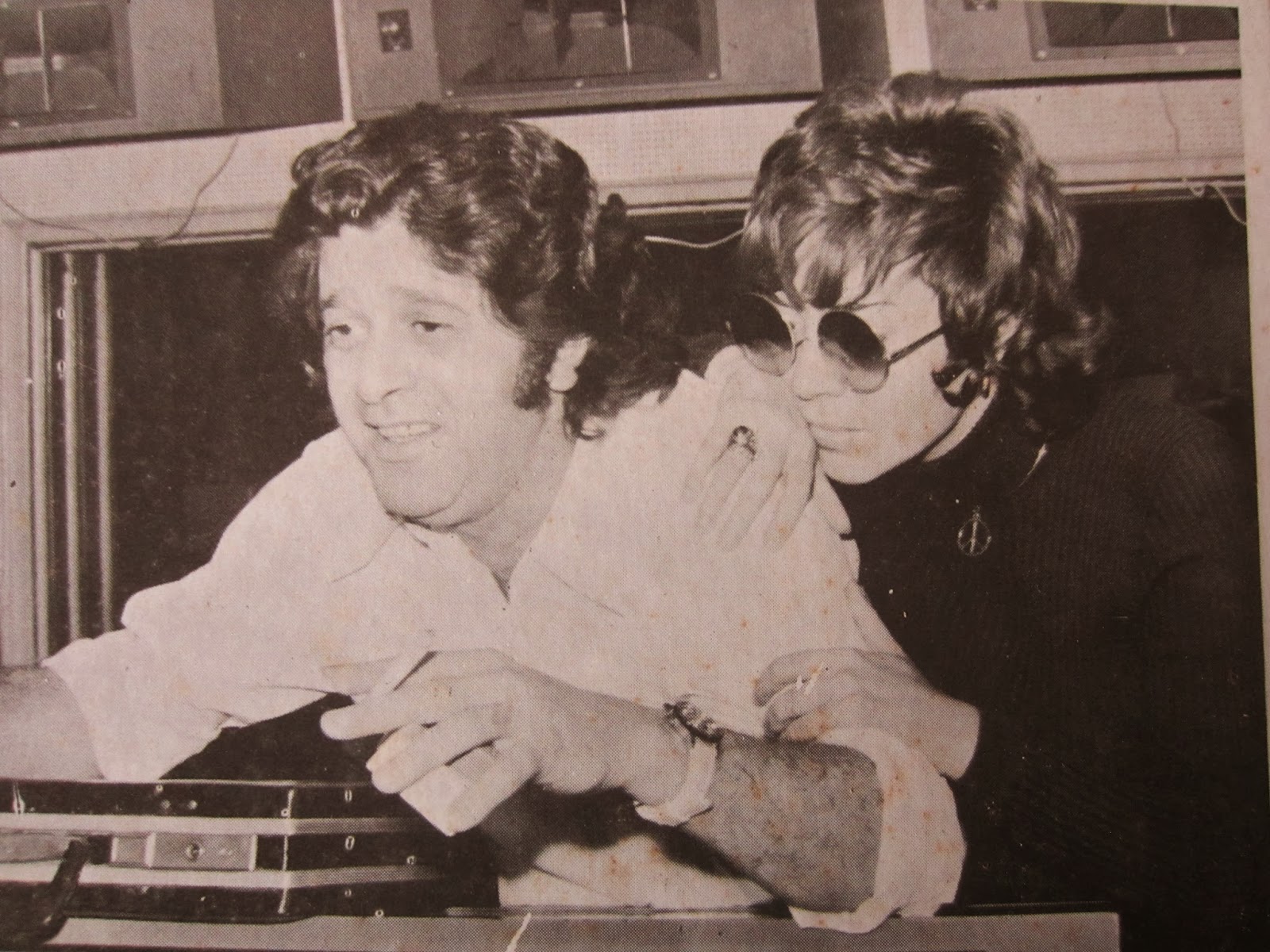 The main highlight of the album is the B-Side which starts after songs like “El hombre aquel” dedicated to Ché Guevara, the song “At the other side of the sea” sung in touching broken English and a bossa nova song sung in Portuguese. It kicks off with an ode to the Universidad Central de Venezuela called “Ciudad Universitaria”. The title reflects Gloria Martín’s passionate relation to her university and its social importance for her city Caracas. The lyrics are as important right now as if they were back then. They describe the paradoxical feeling of attachment  to Caracas with its beauty and danger, because of words like “Ay mi ciudad, quién ha puesto detrás cada flor un policía?” which is accompanied by studio effects creating police alarms to intensify the lyrics. Apparently that song used to be censored during the seventies, because students adopted it as a form of social critique. The song itself is full of energy and shows some of the most groovy rare groove jazz ever to come out of Venezuela. The next song “Mi dulce amigo” is a song that should have been on some Jazzanova groove-jazz compilation of old killer tracks and is an absolute masterpiece. Next is an impressionistic decadent song called “Que facil es” which expresses what goes on in the dreamy mind of a young woman and her gentle diffuse thoughts when she’s under a spell of someone. These three songs make up that part of the album which elevates it into something of unique quality and emotion. “Si puedes” is accompanied by Venezuelan Santana-like psych band La Fe Perdida that also released some singles through Philips in the early seventies: like this one and this one. A core element which is to be found throughout the whole album is the melancholy which makes it strong, it doesn’t glorify the interior nor exterior life and it’s truthful, it might also be because of her deep voice; Grace Slick like. The lyrics of each song are to be found on the inner part of the sleeve. Gloria Martín once described her song writing as: 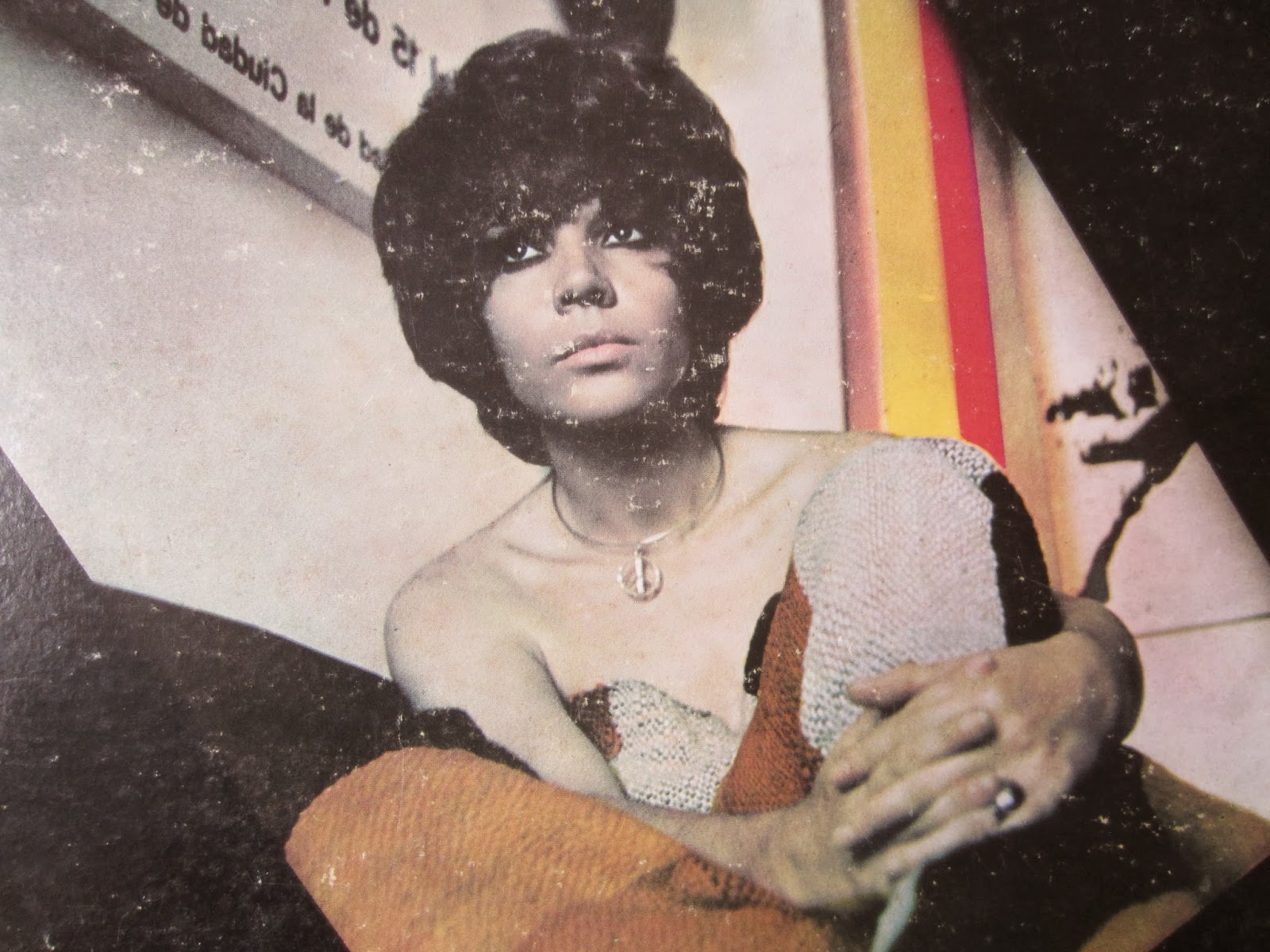 The cover of the album looks amazing. Somehow, although not much is to be seen, one can immediately detect Venezuela in that cover. There is a graphic design idea with the rotation of the rectangle and the colours, the design on the tablet on the background and of course Gloria herself with the most amazing groovy seventies haircut and peace-sign necklace. Those elements feel really Venezuelan if you have some insight in the arts during mid-twentieth century Venezuela and mainly Caracas. The inner part of the sleeve shows Gloria in the studio and you get an idea of the left-wing intellectual groovy girl that she was. 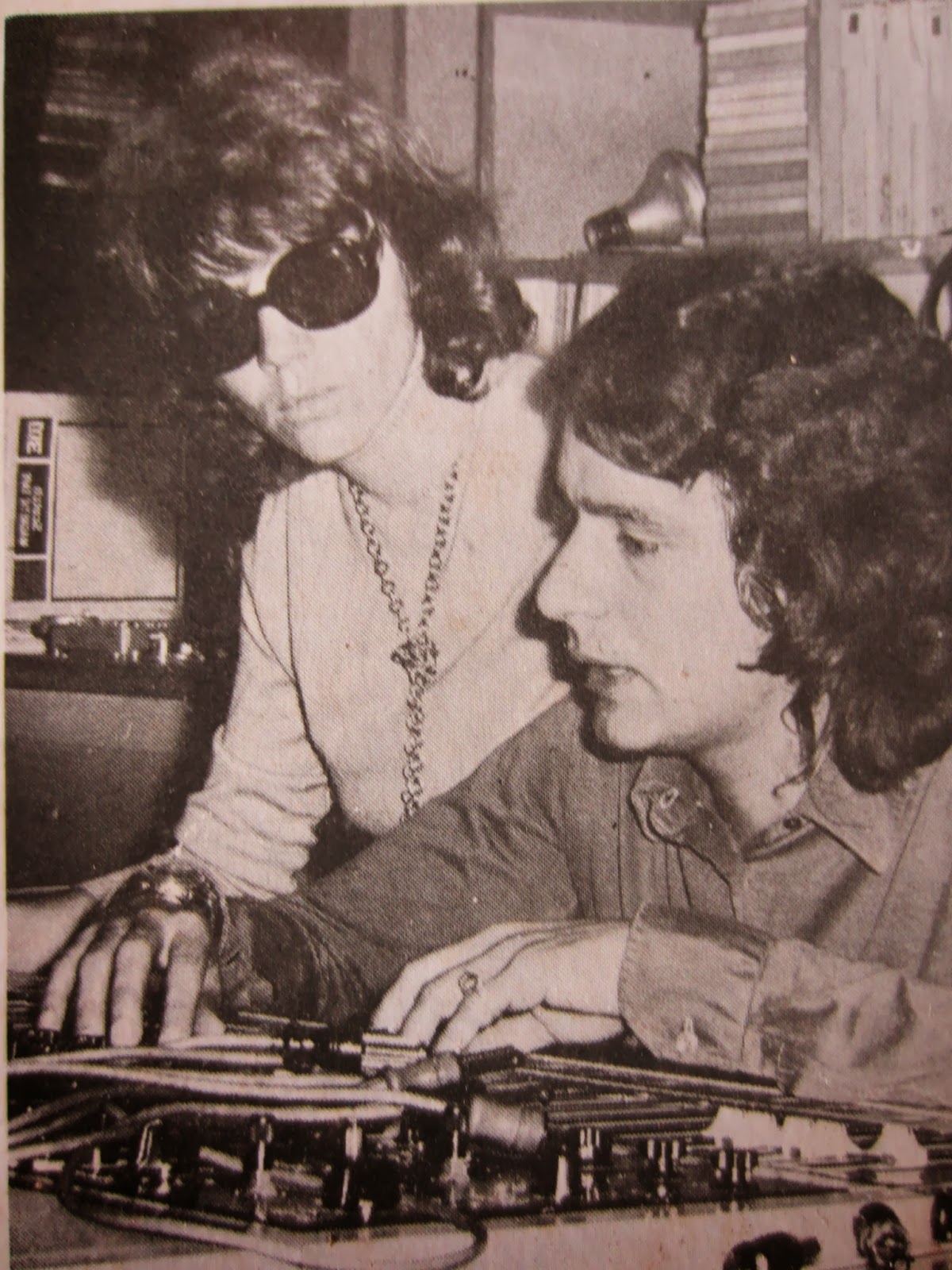 It might look as if I glorify this album too much, but I am really touched by this piece of art and see another hidden dimension why to share this. Even more so since I visited Venezuela and could see the fossils of artistic beauty in Caracas covered in the damage of the modern condition and the neglecting of the past in the modern society. National conflicts have created a situation where people mainly want to consolidate what they benefit from the most in their particular social context and history sometimes gets manipulated to let certain political views benefit from it. Reflection on marginal artistic expressions from the past with value for cultural heritage are a lot of times viewed as a divergence from progressive developments of a modern society based on the physical evidence of wealth. A kind of regime of wealth-symbolism rules and values connected to material profit and the consolidation of social class are part of the primary dimension of how people on a short term deal with the current social struggle. I get that arts as such are of course wholly secondary when social problems raise through the roof, so basic needs for a society should be consolidated first. Still I think that precisely a struggle so critical in combination with modern indifference can cause losses for culture and history. Through those dimensions people can feel connected to each other, shape their history, have their imagination aroused and maybe even find “new old” premises to bridge the political gap. Even when art, like a left-wing protest song, is coloured by a clear political preference it still can be perceived more lightly and political conditions change throughout history. Moreover the intellectual core of people who have created this music and had been connected to student movements had a less uncompromised way of shaping their political views and were also fighting for their rights against an oppressive government during Venezuela’s seventies. So back then a left-wing orientated political philosophy also had an emancipatory dimension to it.

Nowadays politics is like growing up in religion: it exacerbates forming own opinions, because there exists no initiation of the self with the religious values.  But a change is perceivable and people are very engaged with their arts and culture. It seems that everybody knows some national cultural expression which contributes to the beauty of the country, but many things keep being scattered and fragmented in the memories of individuals and don’t find the right path to the public. In my opinion the conservation of cultural expression can for example create political plurality, but also shows something which can shape identity and have people connect to each other. At least people can learn from these individual artists how much one can extract from her/himself without being a product of commerce, excess or machismo which would already be positive no matter what political colour.

The upload of this album, made available for the first time after 43 years (not to be found on the web, I can barely believe it), is for everyone in Venezuela and the world. It has never been sold on Ebay, nor Discogs. Gloria Martín still lives and people have to re-release this album. Make it happen. This is a musical and cultural jewel. This is the definition of essential. Gracias a Gloria Martín y gracias a Venezuela! El disco es cultura!

Another article on Gloria Martín: Pensando en Gloria Martín
More Venezuelan obscurities are to be found on this music channel:
http://www.youtube.com/user/ScratchedLP
Posted by Bence at 03:51