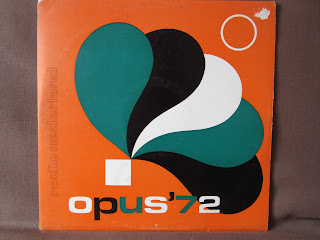 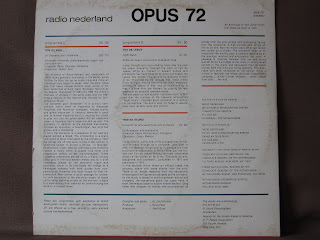 After Opus '70 and Opus '71 that I posted on the blog, here is Opus '72 introducing modern composers and compositions from the Netherlands in 1972. The Opus series were distributed to foreign radio stations to promote Dutch contemporary composed music. The series are essential for exploring Dutch avant-garde and contemporary composed classical music of the previous century.

The first programme consists of a long piece by Rob du Bois inspired by Romanian composer Alexander Hrisanide . The piece requires a pianist not only to play the piano but also an electronic organ, a toy-piano and a large tom-tom. It's an interesting musical piece in which strange piano sounds are the centre.

The second programme consists of pieces by Ton de Leeuw (which I posted before) and Tristan Keuris. De Leeuw's piece is inspired by Indian music and thought in which a flute, played by Abbie de Quant, plays the main role. De Leeuw who studied ethnomusicology was the teacher of Tristan Keuris. Keuris' piece is created for alto-saxophone and an intuitively responding orchestra.