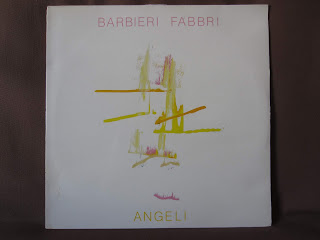 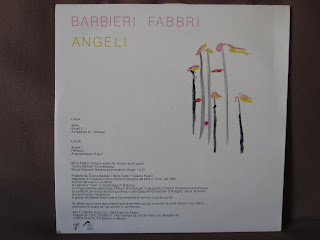 Next up is another album that connects to the previous post balancing on the thin line of alluring musical ambience and a generous pinch of cheesiness.

Italian Bass player Tiziano Barbieri and Guitarist Moris Fabbri made this quite obscure album of Mediterranean contemporary jazz and late 80's ambient sounds in 1988. Both musicians were not heavily involved in other projects but were definitely active musicians. Moris Fabbri still makes  remarkable experimental music today which you can find on his own Youtube channel.

The music on this album is pretty much divided: the A-side has three tracks of composed atmospheres thriving on Italian Mediterranean guitar, eastern voices and guitar-synths-scapes. Actually no real synthesizer is used on the album and all electronic sounds are coming from the processed guitar. These first tracks are maybe too slick, although you also have the feeling that you're familiar with those melodies already for an eternity. The impressionistic style is similar to the Swedish Vinterhjärta tape I posted some time ago.

The music on the B-side should be more pleasing for the improvisation and experimental jazz fans. Those tracks are more abstract and free-form, showing the cinematic and adventurous side of the duo. It reminds me a bit of the Dutch contemporary Jazz soundtrack Golven by Louis Andriessen, but it mostly reminds me of the biblical Risonanze series of Italian library music that I posted ages ago on the blog.

Maybe something different, but it's definitely the soundtrack of the current Indian summer channeling the elements of Earth, Water, Air and Fire while you reminisce of a summer that gently flushes away...