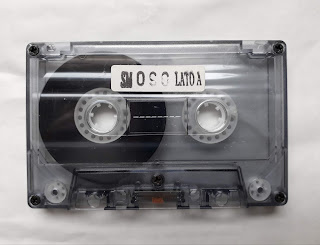 Orbitale Trio was one out of many bands and projects under the umbrella of the Italian independent cult label for improvisation and free-jazz Setola Di Maiale which was created by multi-instrumentalist Stefano Giust in Pordenone. He started out with the legendary improvisational, punk and experimental band Le Bambine. A completely underrated band that to me still stands out as one of the greatest musical projects of the Italian alternative autoproduzioni scene that was bridging the 80's and 90's.

During the 90's Giust produced a great amount of releases with Setola Di Maiale and the musical output became more jazz oriented in combination with a few excursions into techno, turntablism and such. All projects on the Setola Di Maiale label were played mostly by the same musicians. None of the output was aiming for commercial success and the label was very clear in communicating this as you can read on the cover of this tape.

Orbitale Trio consisted of Stefano Giust, Ivan Pilat and Paolo De Piaggi. Improv Series Zzaj shows their playful repetitive free jazz sounds. It has a real open approach of do-what-you-want improvisation that results in nice tracks which they gave lovely absurdistic titles. One of the tracks on this tape is called Valzer Per Mikols Chadima which is clearly a tribute to Czech multi-instrumentalist Mikoláš Chadima who is the founder of Czech experimental underground groups like Elektrobus, Extempore and later the MCH Band. The music of Orbitale Trio is quite reminiscent of the Italian group Arigret that followed a similar approach with their Italo Calvino inspired album "Se Una Notte D'Inverno Un Viaggiatore..." which I posted some time ago.

I suggest that you dig deeper into the vast Setola Di Maiale catalogue to find the releases you like the most yourself. There is a lot to be discovered and most of the material is freely accessible. Maybe I will post some more music of the label later on.