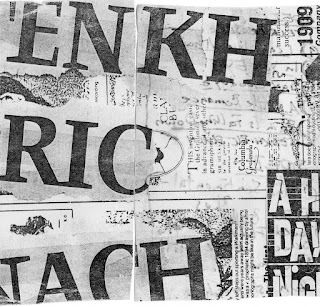 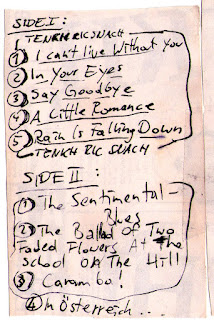 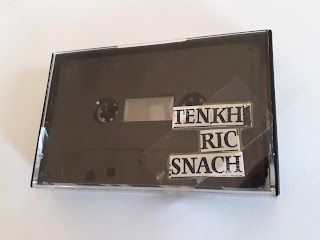 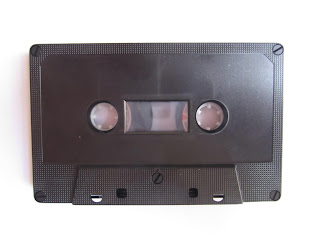 Here we have a great lo-fi 80's synth-pop cassette by the strange outfit Tenkh Ric Snach. The group appeared marginally on less than a handful of home-taping compilations during the 80's, but I have never seen a full cassette by them until now. I couldn't decipher where they are from, on the one hand they sound very much like many home-taping and wave groups from the United States. Those often had a slightly more commercial approach to their DIY electronic sound in combination with utterly demented vocals and maddening compositions. On the other hand Tenkh Ric Snach finishes of this cassette with a track called In Österreich, which could also mean they were from Austria (probably they were because the voice and accent are very Austrian). Besides this I don't know the year of the release. I will need the help from all of you to find all the correct information.

The cassette is a bit fragile and recorded in a very lo-fi manner, the volume didn't even have a real punch. The presented sound quality here is as good as it gets. It will probably appeal more to the real lo-fi music lovers, but beneath the sound quality are cleverly created minimal synth songs that are very poppy (also lyrics-wise) a little absurd and furthermore nice to hear. In line with what I wrote before it could musically either be close to US bands like Tone Set or Los Microwaves but it can also be closer to some of the German language territory resembling a group like The Dancing Chromosomes. I don't think many of these tapes were made. Not on Discogs.