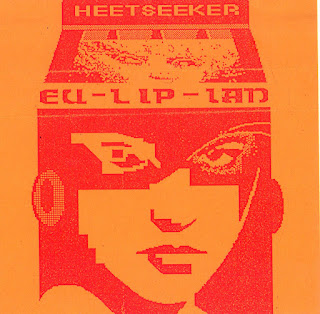 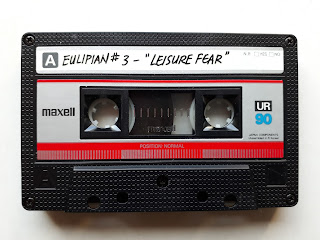 Here's another highly obscure cassette release from the American underground. Out of a mixture of lagging electronics, dark vocals, minimal synth experimentation and flashy guitarwork arises the world of Eulipian. By the end of the cassette we learn that the name Eulipian was taken from a Rahsaan Roland Kirk suite called Theme For The Eulipions. In any case, the music of Eulipian definitely belongs to that American underground feeling of the 80's where the nightlife soundtrack consists of a cocktail of no-wave, disco, punk, Detroit techno, industrial experimentation,funk etc.

Somewhere in that underground we meet Eulipian who slowly turns us into Eulipians with an intimate and hypnotic mix of tracks that comprises of fatalistic underground punky-junkie beatnik mumbling over dark and sleazy synthesized dream-realms with lots of weird electronics, experiments and collaged sounds. It all grows into each other and the entire cassette can be seen as one long trip. The Eulipian one man project kind of resembles Foetus, but is musically closer to an American home-taper like John Lafia.

I have no idea whether the title of this is Heetseeker or Leisure Fear, but let's use them both. I also don't know who was behind the Eulipian moniker or to which part of America this belongs. I left the one-sided cassette unindexed as I felt that the continuity of the music was intentional.

It would be nice to know if more Eulipian music exists. Mysterious, strange and atmospheric. Probably also the good stuff when listening under the influence.