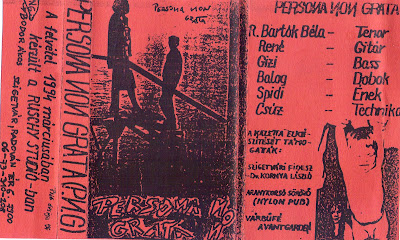 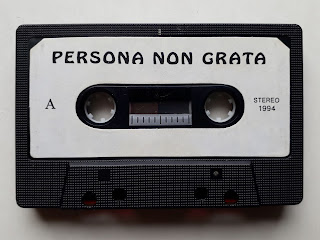 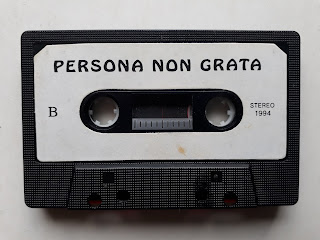 Here we have another obscure cassette from Hungary's underground belonging to the alternative 90's. I won't make it a habit to intertwine my personal history with the music I present on the blog, but in this particular case it's inevitable.

Persona Non Grata is a band from the small Southern Hungarian town of Szigetvár that in its longest consistent period consisted of Kaszper „René” Gyula (guitar and vocals), Bodor "Gizi" Ákos (bass guitar), Rosta „Kakas” Béla (Trumpet) and Balogh Tamás (drums). The band sometimes involved other musician friends and has been morphing into different line-ups until this day.

The band was formed in 1990 by a couple of friends living in the same building who were not specifically musically educated. They decided that a band had to be created and each person had to pick an instrument. No sooner said than done, Persona Non Grata came into existence and hours and hours of try-outs took place. In the beginning the band had an unorthodox punk sound of which the attitude was loosely reminiscent of the music approach of Dutch DIY punk band The Ex. Not long after that they started to grow into different directions and incorporated various music styles. The punk attitude became more of a point of departure than the main sound of the band.

Within the Hungarian music landscape of the 90's a protagonist band and label was Trottel (Stereodream Experience), another example of a band that started a decade earlier as a punk band within the context of totalitarian communist repression and developed a new more ethno-pychedelic sound later on. They created an important underground distro infrastructure and were a center point for contact information on different alternative bands in Hungary. PNG soon caught the attention of Trottel Records and some cassettes were released through their label and distributed across the Hungarian underground circuit.

PNG became a band I got close to during childhood in the 90's. My grandmother had moved to Szigetvár after the collapse of the communist system and my father was finally (communism collapsed) able to travel back to his native country after fleeing to Holland in 1980. Arriving to this unknown place it was almost miraculous that such a great band that had almost no other reference than itself had established itself in this small Hungarian town. My father became friends with these young musicians and an intensive creative music exchange took place. After some years past the guys of PNG had a rehearsal space in an old socialist shoe factory in town where a parallel universe existed to the regular quite poor and rough life of the Hungarian countryside. For me it was an introduction to a sort of communal setting where music and alternative leisure (people getting wasted) was the daily routine. As a child I was present at many of the rehearsals and concerts of the band. It was the first time being 5, 6 or 7 etc. years old playing drums or holding a bass guitar. I was fascinated with the whole scene and I knew they were my friends. It was life changing from the perspective of a child.

In Hungary, historically, most bands (attitude not sold separately unfortunately) come from the capital Budapest. There has always been a sort of weird bias against bands from the countryside. Nevertheless PNG did something incredible for their region and kept true to their city, identity, political stance and were not intimidated by public opinion nor popularized their sound. The music represented something of its own and proved to be of international quality (Kisvárosi Psycho). Gradually they started to play every year at the big Sziget Fesztivál in Budapest (that has an alternative origin, but corrupted into one of Europe's biggest commercial summer festivals) and they started touring abroad from Holland (a.o. OCCII Amsterdam) to Italy and from Croatia to Germany. They did so many gigs, organized many local festivals and did many other projects in their home-town Szigetvár and beyond. Eventually they developed a tight experimental nu-jazz and trip-hop infused art rock sound akin to 90's/early 00's bands like UK's Red Snapper or the underrated Polish band Robotobibok, yet maintaining an alternative edge.

I'm fortunate enough to have witnessed and grown up with this band during the entire 90's and beyond. This cassette is Persona Non Grata's first ever release from 1994. In April this year their drummer Balogh Tamás, one of Hungary's greatest drummers in general sadly passed away. I found out that the band had been looking for their first cassette in an attempt to gather their entire discography, but they couldn't find a copy anymore.

Here we are in this insane year of 2020 during their 30 Years Anniversary and I'm happy that I can recover that first cassette (my father's copy from an old dusty box here, maybe the only one that survived?). It brings back endless memories of Hungary in the 90's. Such good times. Probably those days are never coming back again but the legacy continues...

In loving memory of Balog Tamás and as tribute to Persona Non Grata (30 év!).