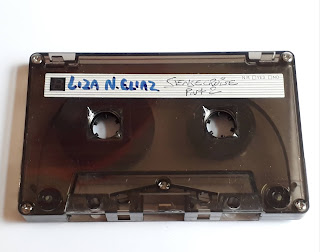 Liza Néliaz (1958 - 2001) was an electronic dance music producer and hardcore techno DJ from Oostende, Belgium. During the late 70's Néliaz was part of different Belgian avant-garde and new-wave bands. In the 80's Neliaz was strongly involved with the international home-taping network and contributed her tracks to cornerstone compilations on pivotal cassette labels like Insane Music (Belgium) and Exart (Netherlands).

By the late 80's, Neliaz started to play a self-invented style of proto-dance music that somehow connected the DIY spirit of 80's home-taping with new beat and the upcoming rave culture that would later evolve into established genres like techno, hardcore and acid house. She was a pioneer (one out of many ofcourse) in exploring these new musical styles in which perhaps the most important element was musical continuity. No breaks were taken in-between the tracks. Through her inventive hardware set-up she was able to play a variety of different tracks that were weaving in and out of each other continuously resulting in what we would call a "live-set" today. From the 90's onward Liza 'N' Eliaz established herself as an important hardcore techno DJ which granted her the underground title of Queen of Terror. The name Liza was adopted because in those days it used to be a nickname given to Trans people in Flanders. She used her abilities as a musician for her DJ-sets that were uncompromising, lethal and full of energy. Neliaz lived a nomadic lifestyle dedicated to music until the end of her life. She sadly passed away in 2001.

Sensecruise Part 2 is an early cassette by Liza Neliaz that was released around 1989 or 1990. It's the sequel to the Sensecruise Part 1 cassette which I've never heard. Unfortunately there is no cover for this tape, but who knows whether this was properly distributed at the time in the first place. Musicwise it embodies the sound of the transition of decades and the birth of a new sound of the 90's. Sensecruise Part 2 contains a pretty spot on home-made rave sound. I filed this release under "Belgium", but it clearly could have been recorded in France or England at the time. The music resembles the early work of 808 State or Orbital here and there, big acts (as we all know) that would soon succesfully spread similar sounds on a worldwide scale. However Liza Néliaz was never interested in the commercial aspects of dance music and couldn't identify with the course the culture took when free parties were starting to decline and certain DJ's were gaining so called star levels bringing competition and jealousy into a free music culture. Her DJ sets could sound relentless at times, yet humor, interaction and joy through the music were the main reasons behind Liza's musical practices.

Maybe it's the first time some kind of dance music comes to the blog, but also that is part of the underground music kaleidoscope of the past decades. Another piece of the Liza Neliaz puzzle at least. A special musician that deserves some proper attention from labels out there. Maybe someone has more early recordings?

Here's another article in French about Liza Néliaz that also provided some of the information above.