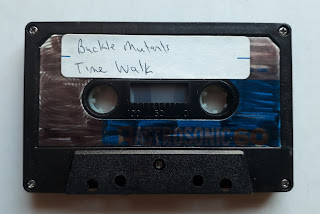 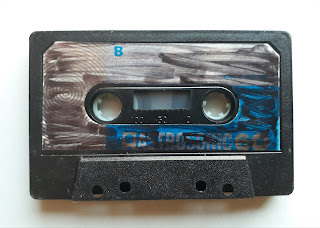 Here's a tape I know nothing about. Apparently Buckle Mutants were a band from New Castle, Pennsylvania that consisted of C.B. Book, Savdyabitamitalo and Squiz McFiz, but something tells me that this was mainly a one-man project. From what I can make up from the cover it was sent as some sort of demo to Ducktooth Tapes of which I've never heard either.

In any case it's a DIY product of home recordings and probably not many of these tapes were made. The music of Buckle Mutants is based on experimental guitar noises that are colliding with some deranged metal tunes all non-carefully packaged with a punk attitude. Probably it's a product of the 90's, but no year is stated on the cover. Anyhow, here are some more tunes from the far out fringes of American indie music that thrived on a damaged sound production and DIY expression without compromise. Maybe someone knows more about this project.

Some different tunes than usual. In some unusual times. Buckle up mutants! I will post more frequently the coming weeks.