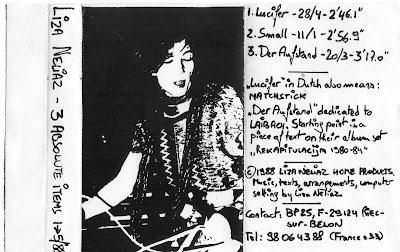 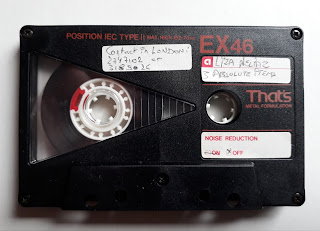 Liza Néliaz (1958 - 2001) was a Belgian electronic dance music producer and hardcore techno DJ from Ostend. Coming from a musical family s/he started out making music in the early 80's as part of different Belgian new-wave groups with which s/he also toured around often. During this decade Neliaz was involved with the home-taping circuit making lots of music ranging from industrial to experimental proto-dance styles. S/he also contributed tracks to international cassette compilations. An example is the compilation Music From The White House: France that came out on the great Exart label that was ran by Dutch home-taper Hessel Veldman (he and his wife Nicole also established a close friendship with Liza later).

During her lifetime Liza Neliaz lived everywhere and nowhere and had a nomadic approach to a life that was fully dedicated to music. For years s/he lived in France, but s/he also resided in London as well as spending many years in Holland. By the end of the 80's and the early 90's Neliaz was one of the key people who immaculately envisioned the connection between the electronic wave sound of the 80's and the newly risen dance music genres and rave culture. Her home-made dance music work can be seen as an evolutionary missing link of the techno and house revolution. Neliaz used a live set-up of hardware that could play entire live sets producing many different sounding tracks that would follow each other up in a sequence without leaving breaks in-between. S/he took the skills s/he developed as a home-taper and developed it into this trance inducing live-set formula that would later become prevalent in dance music. Some of that amazing early dance music will come to the blog later on this year.

During the 90's Neliaz would give up live music to become an important hardcore techno and gabber DJ, producer and a household name of the underground rave culture. S/he passed away too early in 2001. Until this day Liza Neliaz is still praised for her work and her DJ mixes and is refered to as an inspiration in hardcore techno circles.

On this short self-released tape we can hear a sound that still leans more towards the 80's, but is already rather dancefloor oriented with funk influences. One of the tracks is dedicated to the Slovenian industrial group Laibach. On this tape we can already hear how tracks merge into each other: it's that (live-set) approach that makes this so ahead of its time.