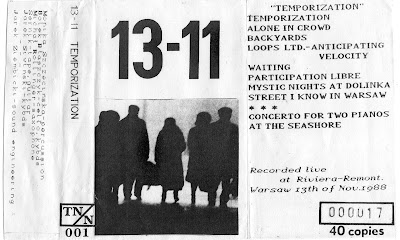 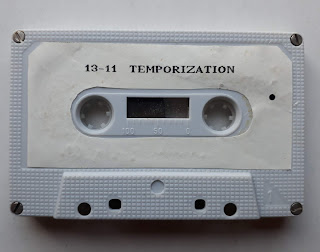 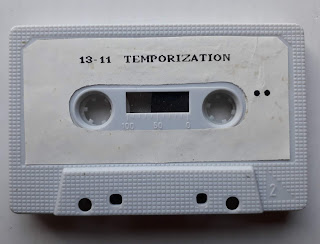 13 - 11 were a one-off improvisational outfit from Warsaw that consisted of Monika Szczecińska (Percussion), Bolek Błaszczyk (Cello and Keyboards), Michał Rollinger (Saxophone), Sernik (Tape, Guitar) and Jarek Siwiński (Keyboards). The group was named after the date on which they played this live-opus in Warsaw on the 11th of November 1988 at the Riviera-Remont Klub. Simultaneously, the 11th of November is the Polish National Independence Day on which Poland gained autonomy from the German, Austro-Hungarian and Russian empires in 1918. Whether that plays a role on this cassette is unclear.

When looking at the members of this group the name of Bolek Błaszczyk provides the most context for me. Błaszczyk is a cellist that played in several important Polish underground groups like Legendarne Ząbki. He also played together with the magical Rock In Opposition outfit Cukor, Bila Smert' (Цукор Бiла Смерть) from the Kiev underground scene (Ukraine). You can hear their collaboration on their beautiful album called Selo from 1993.

13 - 11 is a project that can be placed in the light of the Polish experimental underground of the 80's, the extensive Polish jazz and improvisation history and in the larger context of the Eastern European Rock In Opposition tradition. Even though the sound fidelity of this obscure tape is not very high the band displays a wonderful interplay of improvisational jazz, ambient electronics and cinematographic sound collage all subtly based on the city of Warsaw and the temporality of different places and their atmospheres. It's almost a soundtrack to a non-existing film at times. The music was recorded live as a continuous opus of which the compositions flow into each other. Because of that it was not easy to index this tape, so I left some tracks to transition into the following track. The music reminds me of their peer-band Kirkut-Koncept that also played in a similar style. Somehow the 90's project Kaddish by Towering Inferno also comes to mind, maybe because of its thematic approach.

A lo-fi sound quality cassette from behind the iron curtain again, but this truly is another masterpiece of the Polish underground of the 80's.

This tape was limited to 40 copies.