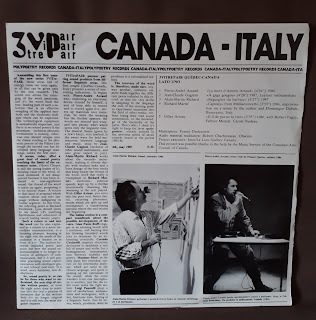 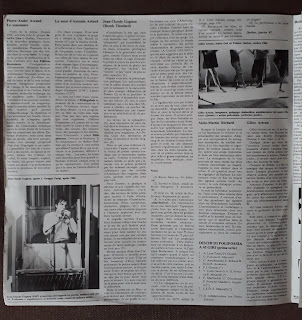 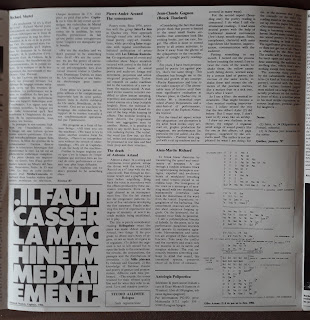 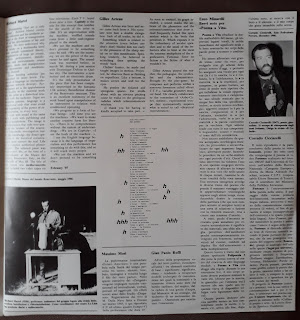 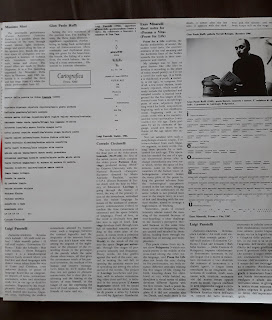 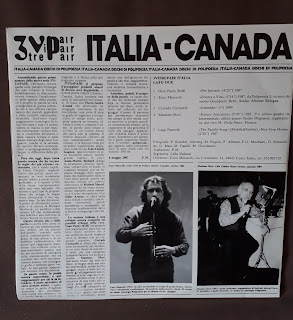 This is an interesting sound-poetry record I found in Italy not too long ago. It came out on the wonderful 3ViTrePAIR label that was founded by Enzo Minarelli, an Italian artist and sound-poet that played a protagonist role in gathering sound-poetry artists on different compilations and hosting poetry festivals during the 80's. He created compilation series around his concept of Polipoesia, that was based upon a manifest on poetry he created. The series were each dedicated to the poetry exchange between different countries. Here we have the compilation that focused on sound poetry from Canada and Italy.

The Canadian poets on the compilation are all from Quebec so the main language used here is French, hence the references to Antonin Artaud the French dramatist and subversive theatre director who also did strange recordings on radio that could be seen as sound poetry to a certain extent. In the liner notes written by Minarelli references are also made to French poets like Henri Chopin and Bernard Heidsieck. The Canadian representatives on this compilation are Pierre-André Arcand, Jean-Claude Gagnon, Alain-Martin Richard, Richard Martel and Gilles Arteau. The poets from Italy are aside from Minarelli himself Gian Paolo Roffi, Corrado Cicciarelli, Massimo Mori and Luigi Pasotelli. Sound poetry has always been important in Italy and this series is another strong example.

The music ranges from sound experiments to casiotone rhythm minimalism to the use of mouth harps, voice manipulation and more. It gives a mail-art music feeling from back in those days that can be experienced on compilation series like the VEC Audio Exchange for example. Here are some contextual words from the liner notes:

It seems, today, after a great deal of sound poetry is touching the limits of the extremest noise, denying value to the word, almost atomized, if not disapeared because it has been reduced to non-significant sound, the thread of the word is taken up again, proposing it in its natural shape. [sic.] Such a return to and into the word can also be explained as a return to a more immediate communication, to a listening pleasure, keeping in the right side the needs of the audience in a theatre or in front of a TV. The authors herewith included prove and point out how the sound experimentation is no longer synonym of ambiguity of communication, but is still possible practising sound experimentation with intelligent grace and refined, oral taste. In a word, more harmony, less disharmony. So, sound poetry is, or can be for those who want to understand, the next step of certain written poetry, at least the right entry door to continue into the oral a process of invention that in the written field it's no longer original and it is still into the most stagnant impasse. - Enzo Minarelli