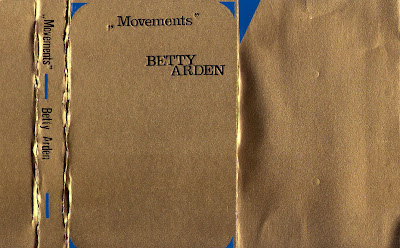 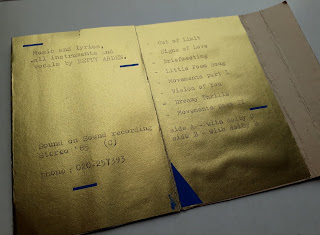 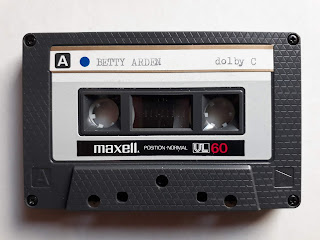 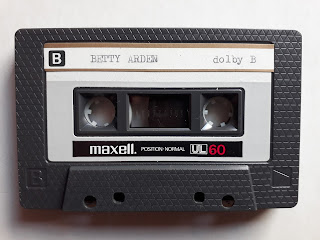 Betty Arden is an Amsterdam based musician and home-taper who released a couple of cassettes during the 80's. As a skilled multi-instrumentalist her musical output has been a combination of folk, new wave, minimal synth, ambient soundscapes and gloomy pop. I'm not sure whether Movements was her first release but I do know that some other cassettes came out later than this one, like her album Music for Films. In 1986 she also contributed a track to one of the mythical Oscar's X-Mas Carols compilations, which were created and compiled by Dutch music journalist and cassette expert Oscar Smit. During the 80's he wrote informative reviews about newly released cassettes for the Dutch music magazine Vinyl.

On Movements we hear great inventive and gloomy compositions (she plays all instruments by herself) quite reminiscent of the ethereal sound of groups on the 4AD label (Dead Can Dance etc.). That sound is comprised a.o. of electronic atmospheric elements, melodic acoustic guitar structures in combination with melancholic songwriting and other folk elements. It's a certain new wave sound of the 80's that was more composed in its musical approach, but also found different interesting ways of merging the atmospheric pieces with songs and composition all together on one album.

In that light Betty Arden's music also incorporates those elements, but she also shows she can be playful with her melodies and the usage of minimal synth sounds. Her compositions remind me somewhat of The Durutti Column or Deux Filles, but also of the Dutch new wave group Qua Dance I posted years ago. But ofcourse there are many examples in that musical realm.

It's always good to shed light on a female home-taper of whom we didn't hear much so far! I had to take a picture of the inner cover from a certain angle to reveal the information, because I couldn't get a right scan of that peculiar golden cover.

I'd like to take the opportunity to inform you about a few developments related to music, the blog and my own activities.

First:
Next month on May the 22nd a stunning vinyl compilation is being released by the Belgian StroomTV label that focuses on the musical output of Dutch home-taper Hessel Veldman (Y Create). I'm honored that I was asked by both the Label and Hessel Veldman to write the liner notes for this particular release. Hessel Veldman is also of great help to this blog and someone I consider as a musical mentor so I hope some of you will keep an eye on that release. Pre-orders are here: https://stroomtv.bandcamp.com/album/eigen-boezem

Second:
Next month on May the 25th another vinyl reissue will be released by the new and highly promising Futura Resistenza label. It's the first ever vinyl reissue of Jacques van Erven's Tunes & Scenery (Hard To Whistle). Van Erven is a Dutch multi-instrumentalist and artist who made this unclassifiable and incredible cassette in the 80's. Also in this case I am very honored to have written the liner notes. Definitely keep an eye on the future releases of this label too. You can pre-order your copy here: https://futuraresistenza.bandcamp.com/album/jacques-van-erven-tunes-scenery-hard-to-whistle-lp

Third:
My long time friends Oscar Olias and Matas Labašauskas from Berlin and Vilnius (creators of the Empty Brain Resort, Sucked Orange Gallery, Braille Satellite Festival and what not) have started a new label called Bigbandalone. They just released a marvelous double vinyl by the German home-taping duo Delta-Sleep-Inducing Peptide (Dieter Mauson and Siegmar Fricke) that existed during the late 80's and early 90's. These recordings show another missing link of music that was bridging the gap between the home-taping culture and the psychedelic dance-trance infusion that was rapidly seeking its way into the nervous system of the 90's. The vinyl compiles 28 tracks selected from 14 tapes. Find it here: https://www.bigbandalone.com/

Last:
Lately, by the kind grace of others, but also because of years of doing this blog I got a great opportunity to share yet more material with all of you. But because most of this material is Dutch, the overall consistency of the blog will perhaps be less varied. Ofcourse I will do the best I can to keep Archaic Inventions as international as possible in terms of content, but don't be surprised to see more Dutch tapes passing by here: I don't think it will underwhelm.

But enough with the talks. Enjoy the music! Stay safe and sane out there! - Bence AI