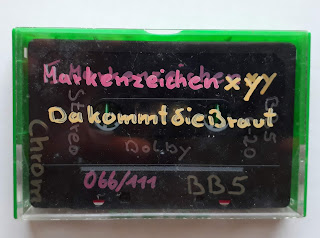 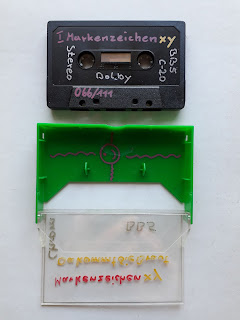 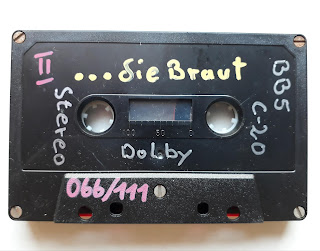 We continue our April fool's journey with another rarity from a far away galaxy of the Neue Deutsche Welle universe. If I'm correct Markenzeichen XY was the first solo release by Uwe Linke from the city of Marburg. He was a delegate of some of Germany's craziest and wacked out Kassettentäter groups of the 80's which he formed with his partner in crime Exo Neutrino called Die Gefährliche Klons (Dangerous Clones) or Different Klons or FunTastiClones or MicroClones etc. I posted their very first cassette some time ago.

Inspired by The Residents and the legendary Hamburg based NDW band Der Plan they started to create their different musical groups of Clone incarnations as well as recording many solo projects. They founded their own cassette label called BestesBänder or Wir Wollen Nur Dein Bestes Bänder (We only want your best tapes). The music was heavily inspired by non-musicianship, the usage of found objects, toys and primitive electronic instruments and synthesizers. The mysterious Clones (or maybe just Exo Neutrino alone) also published a record during the 80's called Unpop under the moniker Lustige Mutanten. It was a 7 inch single inside of a regular LP sleeve containing lots of different demented little tracks. It's still a great album in my opinion, at least it had a big influence on me when I found it as a teenager.

Markenzeichen XY's Da Kommt Die Braut (There Comes The Bride) also displays a collection of short tracks in the typical absurdist clones style. It's a wonderful short tape with the information nicely written all over the cassette box. Maybe there was some inlay or side publication to it displaying the track titles, but I don't have it, so all tracks are untitled for now.

In any case this is a great NDW tape again that was released in the scarce quantity of 111 copies.