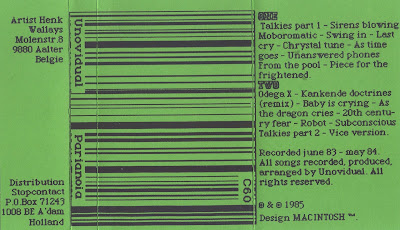 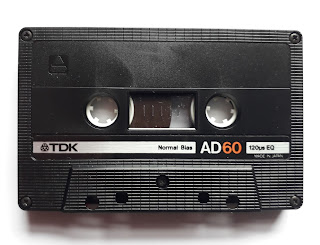 I'm very happy to present another Flemish minimal synth gem by Unovidual aka Henk Wallays. I posted his other cassette Vetganzen In Jacquet three years ago on the blog and I notice that I wrote so much contextual information that it's hard to add something there. But let's try nevertheless.

Unovidual was a project by Henk Wallays who made electronic home-taping music during the 80's in the small Flemish town of Aalter. Under the Unovidual moniker quite some cassettes were released and he contributed to numerous international tape compilations. Wallays was also involved with the Micrart Group that included bands like Linear Movement and Autumn that have become iconic for the Belgian electronic wave sound of the 80's and far beyond. Aside from his solo work Wallays had an intensive and special music exchange with American home-taper Tara Cross with whom he recorded a couple of great songs.

Parianoia is another wonderful collection of minimal synth tracks by Unovidual and it's also one of his lesser known releases. It was distributed through the Amsterdam based Stichting Stopcontact label that was responsible for releasing some legendary tapes by bands like Five Times Of Dust, Tranquil Eyes and S.M. Nurse as well as the Contactdisc vinyl series. Parianoia reminds me a bit of a library music album in the sense that it collects many short tracks that each have their own mood or atmosphere. It also sounds like it could have been the soundtrack to a videogame at times. Some nice anolog electronic tracks of which some are more ambient, but most are comprised of experimental elements and some collages.

Some of these tracks seem to sound quite ahead of their time. I think this is another example of minimal synth home experimentation of the 80's that plays its part in the history of electronic music in general. A sound reminiscent of Ende Shneafliet, John Bender or Das Ding to name a few. Minimal synth galore!